Pangarchulla Peak Trek – Reaching the base

Peak climbing is always fascinating because you get unbelievably beautiful views and an opportunity to challenge yourself. As the saying goes, “the best view comes after the hardest climb”, a summit climb can offer you an experience of a lifetime, be it Everest or any shorter mountain peak. This time, I headed for Pangarchulla Peak trek after a long break. Yes, I was on a break due to an accident that happened a few months back but by god’s grace, I got well soon.

Pangarchulla peak is situated near the renowned city of Joshimath in Uttarakhand. The trek is popular and is quite near to the famous Kuari Pass, which is also known as the Lord Curzon trail. The duration of the trek is 6 days and the gradient is difficult. Pangarchulla peak has an elevation of around 4600 meters and it offers amazing views of many Himalayan peaks.

May 25 – Drive from Rishikesh to Joshimath

As usual, I started my journey from Delhi on the night of 24th May by Volvo bus which I boarded from Kashmere Gate ISBT. The station was totally packed and it seemed as if all the Delhiites were there. The rush was due to the Char Dham season and the weekend. Then, I boarded my bus and began my journey. After a comfortable Volvo journey, I reached Rishikesh by 4:45 am, met my trek mates including Manas (my friend from HMI), and then we began our 12 hours long mountain drive to Joshimath.

Joshimath is around 250 km from Rishikesh and it usually takes around 10 hours to reach there. However, this time there was too much rush on the roads due to the Char Dham season. Every year in May and June, people from all over India visit these famous temples (Badrinath, Kedarnath, Yamnotri and Gangotri) to show their devotion. Besides this, the road broadening project was also going on due to which there were excavations at several places and the mountain cutting process was going on. The journey was full of bumpy rides, dust, and multiple traffic jams.

We also met an amazing traveler who came from Germany and was riding a bicycle all the way up to Badrinath from Haridwar and, that too, with all his luggage. I was really surprised to see him because during the day it was too hot and the roads were really bad and his age was around 60. I don’t think I need to add-on something. Salute to that man!

We reached Joshimath by 6 in the evening and checked-in into our hotel (Hotel Kamet). After freshening up, we had our dinner and then strolled on the streets of Joshimath.

Read Also: A Trek to Parashar Lake in Himachal Pradesh

We got ready by 8 and had our breakfast at a restaurant nearby. The way it is Maggi for some people, for me is aloo parantha on the mountains. Although it is a bit heavy as a breakfast meal, I always prefer it over other food.  We had half an hour left before leaving so we went on the hotel terrace for some sunbath. Few snow-capped peaks were visible but we couldn’t recognize them properly.

We then took our rucksacks and trekking poles and left for Dhak village by Tata Sumo taxi. I personally believe, Mahindra Bolero and Tata Sumo are the best vehicles that are suitable for commuting on mountains as they are made for Indian roads by Indians. It was a drive of around an hour and we reached the starting point of our trek. The road to Dhak village goes further up to Malari village, which is located inside the Nanda Devi National park. We again got a view of the snowcapped Himalayan peaks and this time they were clearly visible and we were able to recognize them. One of them was Bethartoli.

We put on our shades and caps and began our trek by chanting “Har Har Mahadev”. The initial trail of about 2 km was through the road and it wasn’t steep so our trekking speed was good. The first stop on the trek was Karchi village where we refilled our water bottles and bought some eatables from a shop. After passing the village, the rocky trail started. The sun was strong and we all were already sweating. As the forest was way far from that point, we knew that we would have to struggle under the sun without any shade. The trail was uphill but not that steep. The first half of the day’s trek was a blend of road and rocky trail whereas the second half of the trek was completely rocky. We took the second halt at Tugasi village where we had juices, chocolates, and homemade buttermilk, which was really good.

After resting for 20 minutes, we resumed our trek and entered the scenic Oak forest. It took us another hour from the village to reach our first day’s campsite which was situated at Gulling top. We were blessed with the scenic sights of Mt. Dronagiri and Hathi Godha peaks from the trail and the same were also visible from our campsite too. We ate Dal Chawal for lunch and took rest for half an hour. In the evening, we played Dumb charades which I played really well and it was fun. Post that, we started telling our school/college funny/fight incidents. Later, we had our dinner and everyone went inside their tents.

May 27- Trek from Gulling top to Mini Khullara

After waking up, as we came out of our tents, the first thing that we spotted was the Dronagiri peak with the majestic view of the rising sun on the left side of the peak. It was like an energy booster for us and all our sleepiness and laziness got vanished. Then, we freshened up and got ready for the trek to Mini Khullara. So, as per our initial plan, we were supposed to camp at Khullara but after the ban imposed by Uttarakhand High Court, we could not camp at the bugyal (meadow) so we had to camp in the forest which was situated just below it.

We also did some stretching and warm-up exercises followed by Garba and then began our trek after having our breakfast. The best thing about the day’s trek was that it was completely through the forest. Hence, there was less exposure to the Sun, therefore, lesser sweating. So, it was comparatively easier than the first day’s trek. The trek was uphill but not much steep and the distance was also less and it took us around 3 hours to reach the campsite.

After reaching the campsite, we drank the delicious Rhododendron juice (Buransh juice) which was followed by lunch. The day’s campsite was bigger than the previous one and we had a good area in the center so we utilized it perfectly. 🙂 Yes, we played cricket and gitti fod or lagori (Marathi) and then played a few rounds of Mafia. In the evening, we went for an acclimatization walk to the nearby place from where we had the first sight of our final destination, the Pangarchulla summit, which was fully covered with snow.

Later, we came back to our campsite and had a piping hot soup followed by dinner. We slept early at around 8:30 pm because we had to leave for the summit by 3 in the morning. The next day was our D-day. 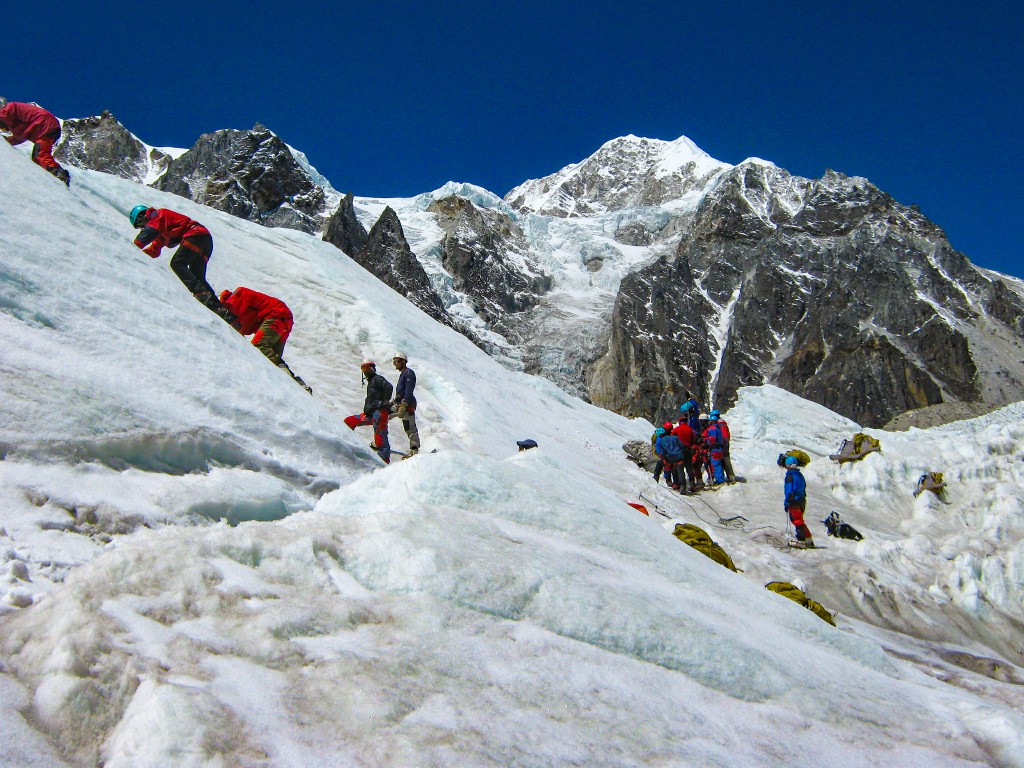 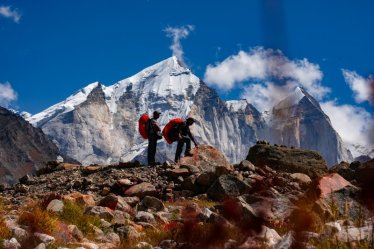