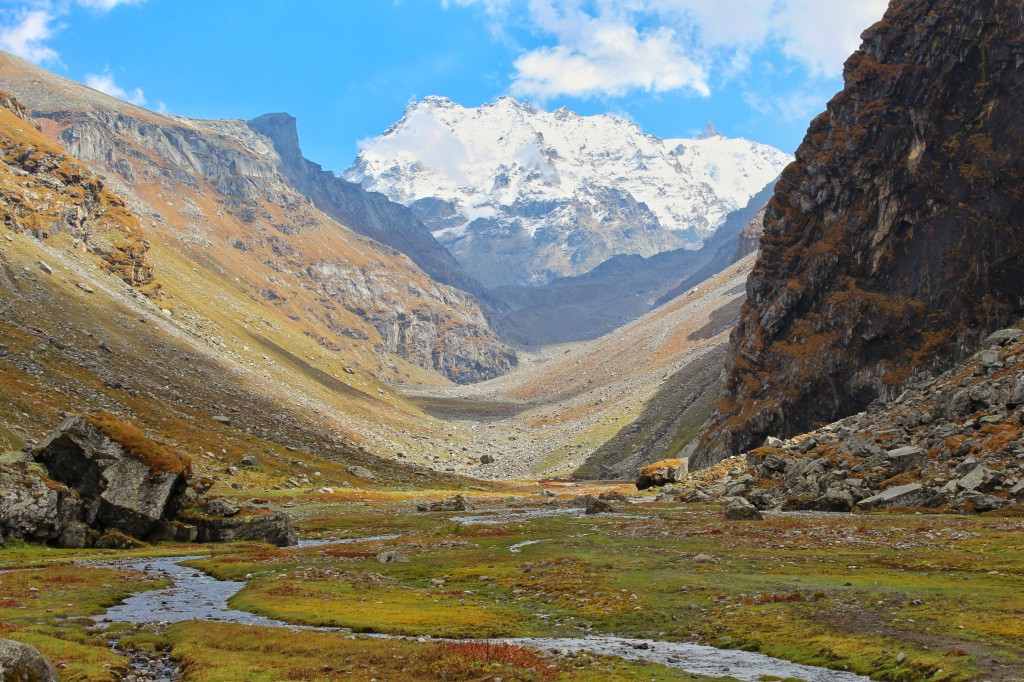 So it all started with the Dussehra long weekend. Nowadays, people deadly wait for long weekends, so that they can leave their mundane workplace and venture out somewhere. Although my work life is quite flexible unlike other people (IT Industry beings) but I also heed for long weekends to go on longer duration treks/trips. This time I planned for Hampta Pass Trek on this long weekend. Hampta Pass was on the top of my bucket list and I was waiting to do this trek since a long time. So I was very much excited for this trek. 😃

Hampta Pass is an excellent crossover trek in Himachal Pradesh. The trek duration is 5 days and the difficulty level is moderate. Novice trekkers having good physical fitness can also go for this trek. The trek offers ultimate views of the valley and lofty peaks. One can easily notice the change in landscapes on the trek. Hampta Pass is situated at an altitude of 4277 meters (14035 feet) above the sea level and it connects the Kullu valley to the Lahaul & Spiti Valley.
So here my journey starts…

Boarded the bus to Manali, as the starting point of the trek was Jobri, which was an hour journey from Manali. The journey was a bit long. It took around 15 hours to reach the prominent hill station.

Reached Manali at around 9 AM and had breakfast of Aloo Parantha near the ISBT. In just another hour, I met my trek mates and then started the journey towards Hampta Pass. We drove towards Prini village and there we left the taxi and walked through the village to follow a ritual. It was a short walk of around 10 minutes and we boarded the same taxi again for our further drive. The drive was scenic. We could see the town of Manali from the road and the mountain ranges of Kullu Valley.
Finally, we reached Jobri, which was also the road end. We took our rucksacks, tightened our laces, filled the water bottles and began the trek. The distance that we had to cover on the first day was 4 km. We entered the forest and there was no sunlight in spite of being the sunny weather as the forest was quite dense. The trail was mostly flat and uphill at few stretches.  We walked for about an hour through the forest and then arrived at an open green pasture of land. We continued our walk for few meters and then saw a vast valley in the rectangular shape. The valley was amazingly beautiful. There was also a river named Rani, flowing through the middle of the valley and enhancing the beauty of it. Took our first stop at a shop and had chocolates there. 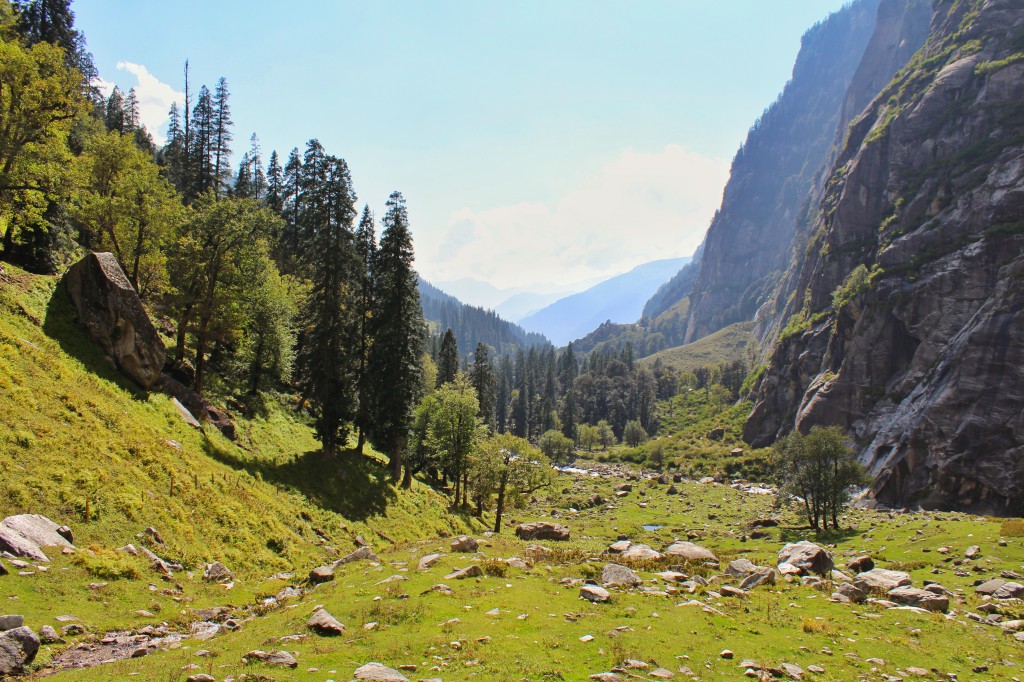 We then resumed our trek by taking a downhill path into the valley and then crossed a bridge over the river. Now we were on the left side of the valley and could continuously hear the sound of the river. The weather was sunny and we were enjoying the trek. The further trail was through the valley and we had to reach the end of it. The trail was mostly flat and full of boulders. The advantage of having too many boulders on the trail is that you don’t need to find a location to sit and rest. J 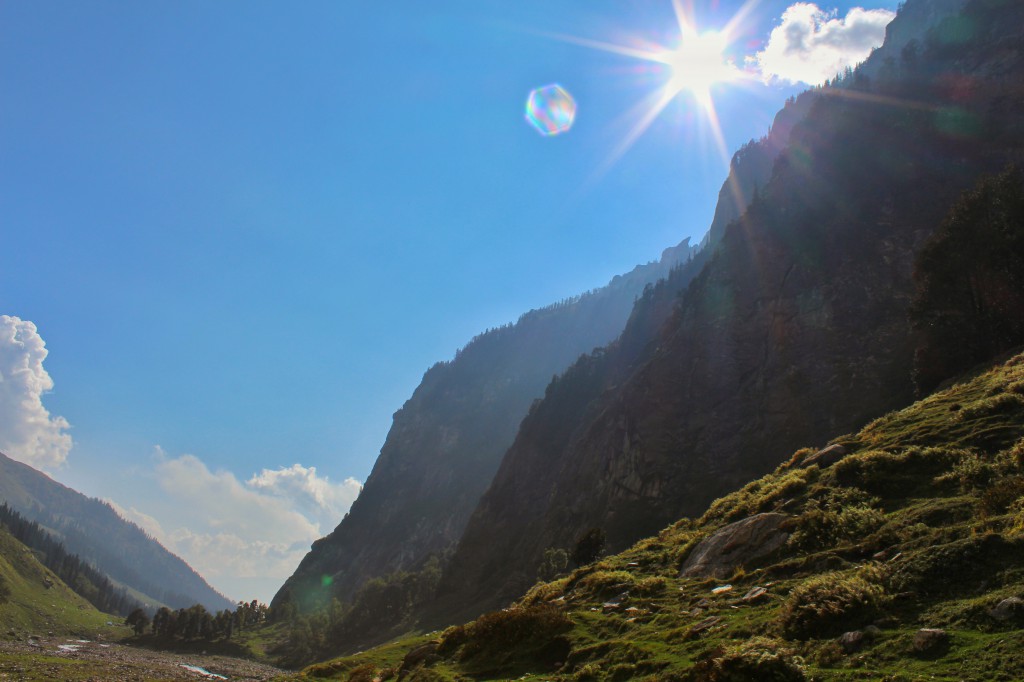 So here i completed one more trek from my bucket list that is Hampta Pass. The trek is amazingly beautiful and offers variety of landscapes. The views we get on 1st day are full of vegetation and it start decreasing as we move towards Lahaul & Spiti Valley. This one is from the 1st day while we were on the way to Chika Campsite. #travelwriter #instatravel #travelgram #passportready #travelblogger #wanderlust #postcardsfromtheworld #traveltheworld #igtravel #igwriters #worldcaptures #photooftheday #wravelerforlife #travelphotography #wanderer #tripotofeaturedtraveller #tripotocommunity #indiapictures #photographers_of_india #condenasttraveler #dslrofficial #indiantraveller #hamptapass #instahimachal #himalayangeographic #natgeotravel #justwravel
A post shared by M A N U (@indian.backpacker) on Oct 3, 2017 at 4:20am PDT

We reached our campsite at 4 PM and saw that the kitchen tent was already pitched. The campsite was near the river and the views were alluring. We did not get tired much. As it was already 4 on our watch, the weather started changing. So we opened our sacks and put on some thermal layers on our body. With the weather, views also started changing and were getting more scenic. Our camps were pitched near the Rani River and we could hear the soothing sound of the river. Then we had delicious soup by late evening and slept after having dinner. 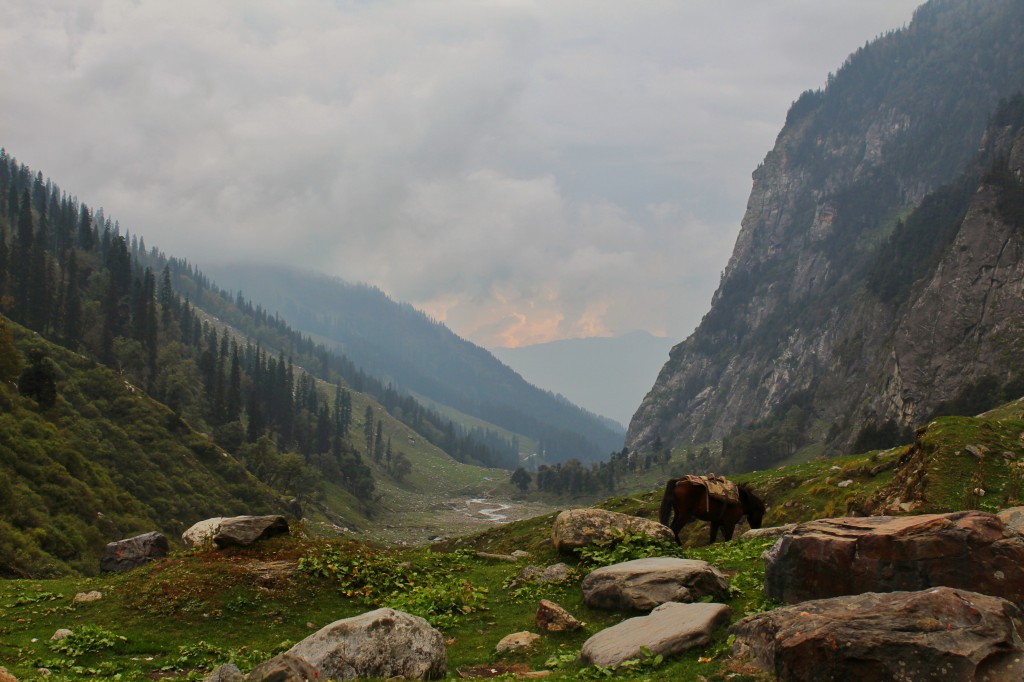 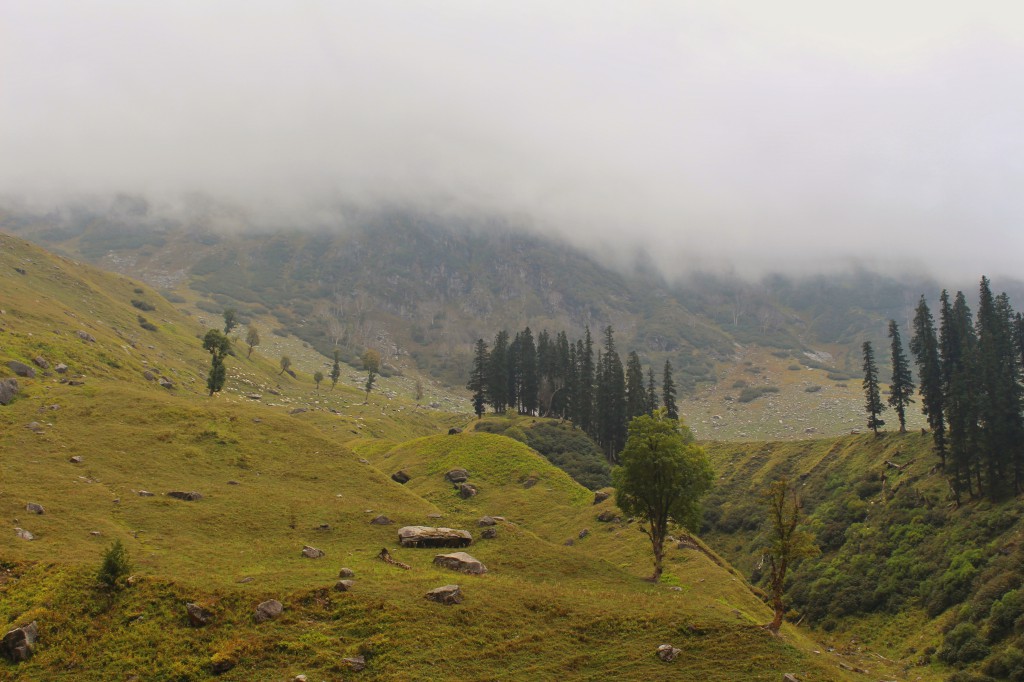 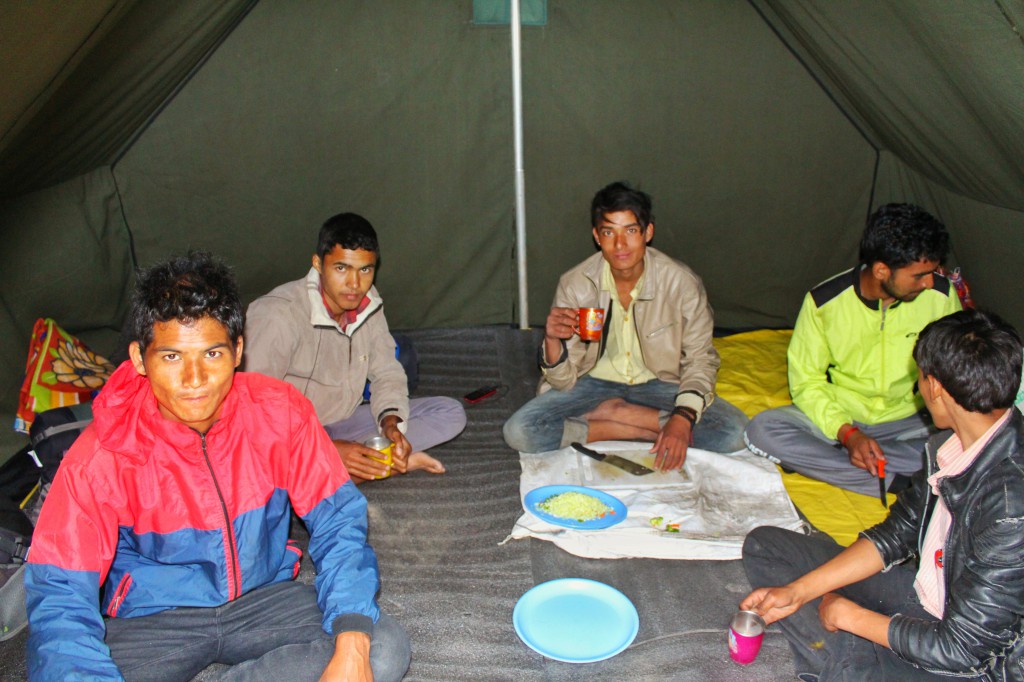 I woke up a bit early to capture a time-lapse video of sunrise. I took my GoPro and went to the nearby hill, slightly above the campsite to get a perfect frame. After fixing the GoPro, I waited for around 45 minutes but the sun didn’t come up. I could see only the rays. The sun was hiding behind the lofty peaks. After around 50 minutes, the battery of GoPro got drained and I had to come back into my tent. I got inside, took off my shoes and suddenly I saw that the sun was rising. The only thing I could do at that time was capturing with my camera and I took a shot. 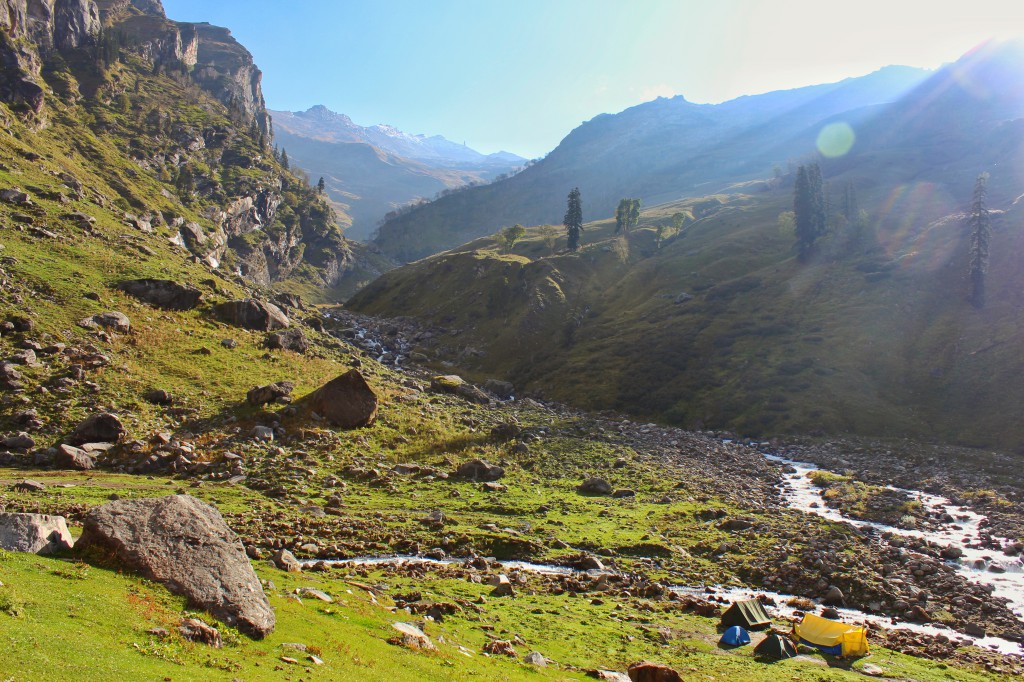 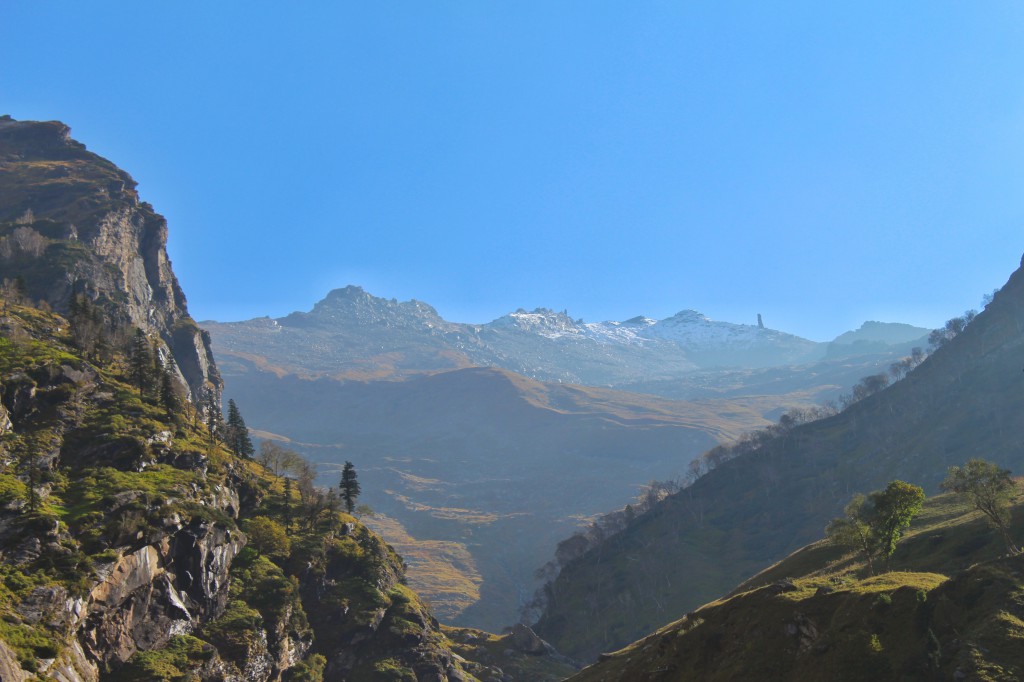 Then we got ready, had breakfast and commenced our 2nd day trek towards Balu Ka Gera. The initial trek was along the Rani River and was mild uphill passing through the big boulders. After covering half an hour of the stretch, we reached a point where we had to negotiate a big rock by climbing on it. The stretch was a bit tricky but we crossed it without any difficulty. Then we arrived on a big paddock and we could see Mt. Indrasan right in front of us. The entire valley was U-shaped and we could clearly notice a change in the landscape. Now there were no more trees and grassy patches further from that point. 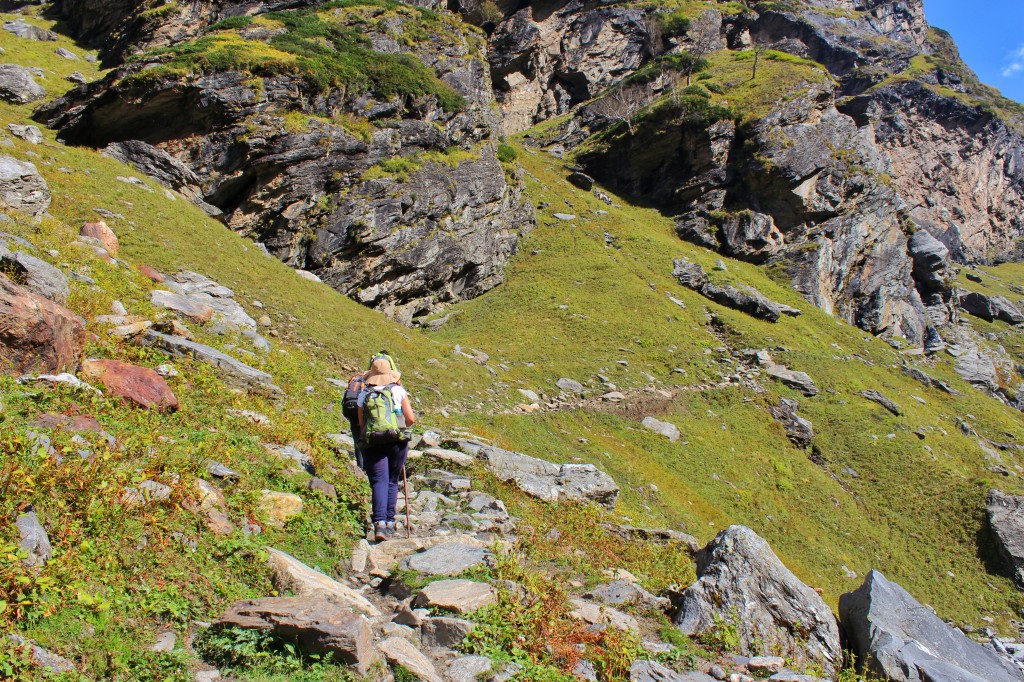 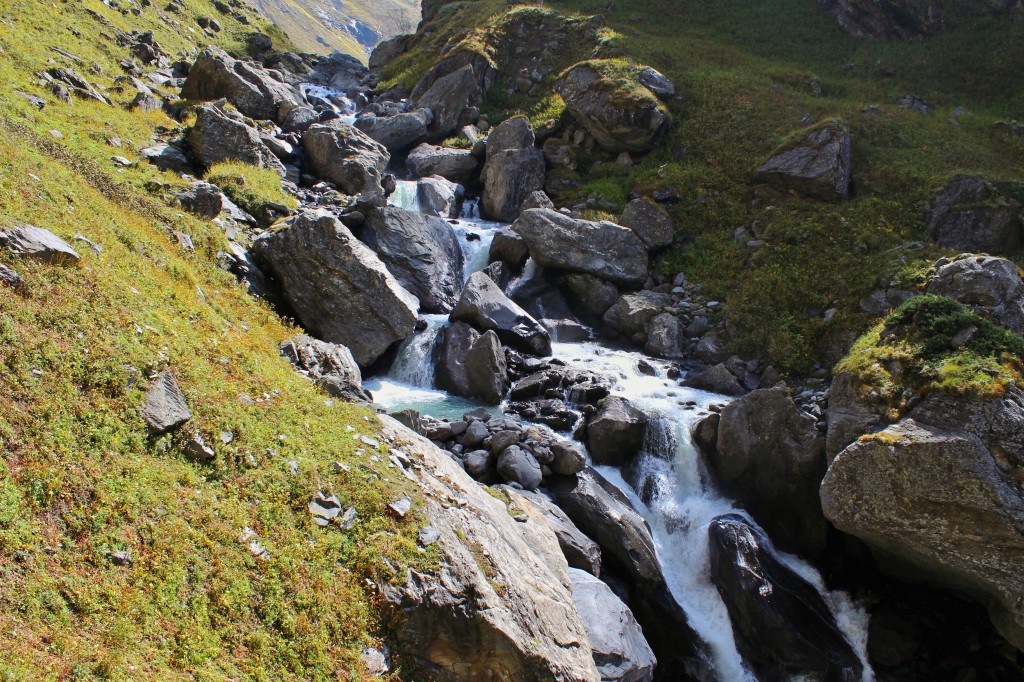 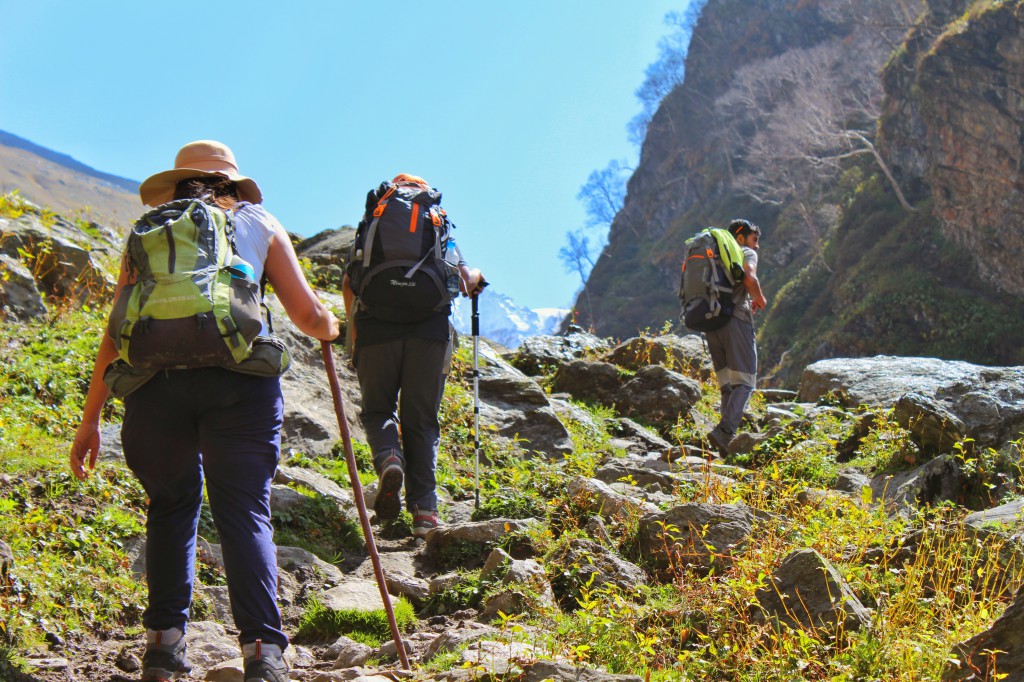 We continued our walk and saw a huge herd of sheeps. It seemed like we entered into a world of sheeps. We walked through that flat trail and then arrived at a point where we again had to show our strength. This was something that we had never tried and were going to do for the first time. We had to cross a river with barefoot because there was no bridge. Although the river was short but the flow was strong and the water was bitterly cold. We quickly took off our shoes, folded our pants and started crossing it. Initially, we didn’t feel the flow much but it was quite strong in the center. We were continuously crossing by holding each other’s hands and finally, we reached the shore. Our feet got completely numbed so we started warming up to make them normal. It took us 15 minutes and then we resumed our trek. The further trek was through the U-shaped valley and was a level walk. The surface was covered with sand and stones and that is why the name of the site was Balu ka Gera. We reached our campsite at around 3:30 PM and the weather already turned cloudy by that time. We took rest for a couple of minutes and then had Maggi. While we were having Maggi inside the kitchen tent suddenly we started hearing a dropping sound on the tent. I opened the zip, went out and found that it was snowing. It was an unexpected snowfall. Though it lasted for half an hour but we enjoyed. Later in the evening, we had dinner and the temperature dipped gradually during the night. The night was starry and frigid. I decided to capture the stars. Everyone was inside the tents and I was standing outside as I had set the long exposure shot of 30 seconds. It was completely dark and I couldn’t see a single thing, not even my hands. While I was waiting for the shot to be clicked suddenly I felt something besides my both legs. I tried to find out the thing with my hands and it seemed like an animal. I got really scared for a moment. I thought it was a bear but later found after turning on the torch that they were dogs. Captured 2-3 shots and then got inside and slept. The next day was most important for all of us as we had to cross the “Hampta Pass”.