Home Uncategorized 5 Exciting Places To Celebrate Holi In India
by Manu KhandelwalMarch 21, 2016March 21, 2016Leave a Comment on 5 Exciting Places To Celebrate Holi In India
India is known for its colorful culture and festivals. It hosts one of the world’s best festivals such as Diwali, Holi, Raksha Bandhan, Lohri, etc. These all festivals are known for their rituals and celebrations. If we talk about unlimited fun & excitement then the name comes, Holi. Holi is everyone’s favorite festival. This festival is celebrated by all kind of people, whether they are children or they are senior citizen. The best thing about this festival is that it is the cheapest festival. It doesn’t require much expenditure to celebrate Holi. To celebrate Holi, all you need is color/gulal and some water.
The best way to celebrate any festival is to celebrate it with family. But if you want your celebration in a unique way then you can visit some incredible places to make this festival an unforgettable one.
Experience these 5 unbeatable places to celebrate Holi in India, this year.

Barsana is the most unique place to celebrate this amazing festival called Holi. While everyone in India celebrates this festival by throwing colors and water and Barsana celebrates this festival in a very own unique way. In Barsana, women chased after their men to beat up with bamboo sticks called “lathis” and men protect themselves with shields. This is the tradition of Barsana to celebrate this festival and that’s why the festival is called “lath maar holi”. Lath maar Holi takes place around a week before the main day of Holi. Tourists from all over the world gather here at this time to experience and participate in the celebration of this festival.

Well, this festival actually shows women empowerment in India. :p
Barsana is a small village, situated 42 kms away from Mathura. It is the birthplace of Goddess Radha.

The second oldest city in the world celebrates this festival in its own unique manner. Varanasi, situated on the banks of the Ganges River, comes at the top when it is a matter of traditions and rituals. The night before Holi, people celebrate by doing bonfire on the banks of the river. At the time of festival, the city is filled like an overcrowded train who just want to travel through its narrow streets and ghats. Celebrating festival in this large crowd is like taking a roller coaster ride. 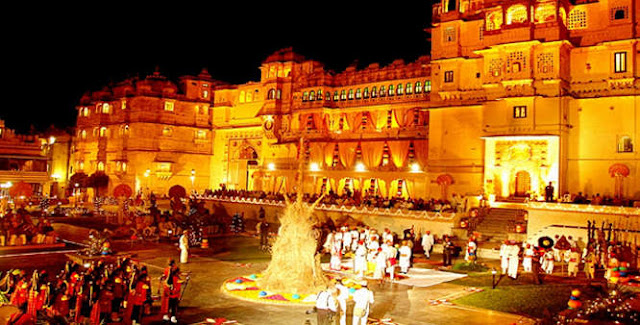 Udaipur, the city of Palaces and Lakes, celebrates the festival Holi with great enthusiasm. The city is prominent for its royal fervor and so its way of celebration. The celebration takes place with the burning of Holika, also known as Holika Dehan. This ritual is practiced in the city palace from the time of Maharaja Fateh Singh. After this, the celebration continues with music, dancing and bursting of crackers. On the next day morning, people reveal their craziness by enjoying with music, dance, colors and sweets.

West Bengal also has a unique and incredible way of celebrating Holi. This tradition of celebrating Holi is recognized as Basant Utsav or Spring Festival in Shantiniketan and it was founded by Rabindranath Tagore. At the time of festival, everyone is dressed up in spring colors. Basant Utsav lasts for three days. In this three days festival, various activities and functions take place such as folk dances, chanting of Tagore’s songs, games, etc. The festival is now considered as an important part of Bengali heritage. A large number of tourists visit Shantiniketan every year to experience this festival.
Note: Don’t miss the “Bhaang” :p
..Happy Holi | Happy Travelling..