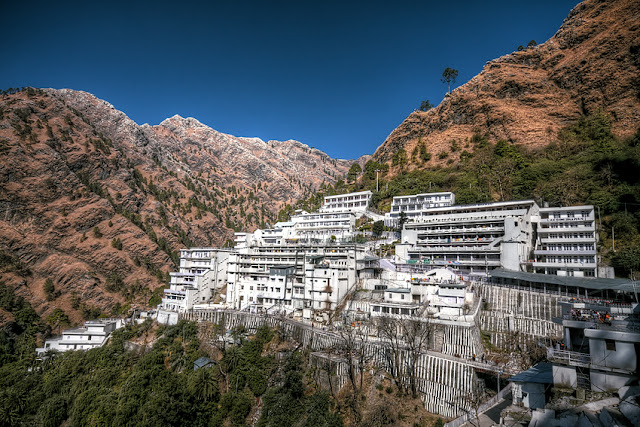 Vaishno Devi Temple is one of the most visited temples in India. People have very strong beliefs for this temple. To reach the temple one has to do a yatra or trek of about 14 km. The journey to the temple is very exciting and has a lot of fun in it. People in India generally visit this temple with their family or friends. As this is one of the most visited temples, it attracts a huge number of pilgrims around the year. And because of this rush many people couldn’t do darshan properly. With the help of this guide one can easily reach the temple and have darshan without any inconvenience.

Vaishno Devi temple is a temple devoted to Goddess Durga or Vaishnavi, situated on the trikuta hills in Reasi district of Jammu & Kashmir state of India. It is the second most visited temple in India after Tirupati Balaji temple at Tirumala.

Yatra for Mata Vaishno Devi Temple starts from Katra which is a small but bustling town in the Reasi District of Jammu & Kashmir state in India. Katra is around 45 km from Jammu city by road and about 78 km by rail.

How to reach Katra?

One can reach Katra by road from Jammu or directly to Katra by rail.

One can reach Jammu by air, road and rail. There are a number of trains available from all major parts of India for Jammu Tawi Railway Station (Jammu). Buses for Jammu City are also easily available from many cities of India. One can also take flight from New Delhi to reach Jammu. There are daily flights running from Delhi to Jammu civil airport. Jammu airport is also called Satwari airport.

If you reach Jammu by Rail, then you get the Buses and Taxis ready to leave for Katra every single minute from Jammu Tawi Railway Station only. Fare for buses from Jammu to Katra varies from ₹45/- to ₹120/- per person and the time for journey is 1.75 Hrs (appx.). You can also hire a taxi from Jammu railway station, whose tariff varies from ₹800/- (for 4 seater) to ₹1400/- (for 7 seater).
If you reach Jammu by road, then you can get the bus/taxi for Katra from Vikram Chowk or from Jammu Tawi Railway Station.

Now, you can also reach Katra directly by rail from Jammu and New Delhi. A new Railway Station has been built by Government and in 2014 it was inaugrated by our Prime Minister Narendra Modi. The rail route through this station is too good. The route makes the journey more wonderful as it passes through several valleys and tunnels. It offers various breathtaking views and beautiful valleys to see.

After you reach Katra, you have three options with you,

There are many Shrine Board’s Guest houses to stay at, like: Shakti Bhawan, Niharika Bhawan, Trikuta Bhawan any many more. Tariffs are same at all the places.
At Main Temple (Mata Vaishno Devi Temple), you get Manokamna Bhawan, Parvati Bhawan and Gauri Bhawan to stay at Night).

Before starting your yatra, you have to get a Yatra Parchi (yatra receipt), which you will get from shrine board office at the Katra Bus Stand. Its compulsory for each and every pilgrim to show his/her photo Identity proof to get the Yatra Receipt. There is NO charge for this receipt, its free of cost. Once you get the receipt, keep it safely with you till you reach the main Temple for Darshan.

Auto Rickshaw can be hired from Katra Bus Stand or from Katra Main Bazaar to Baan Ganga River. (The Starting Point for yatra).
Fare ₹50/- to ₹100/- per rickshaw (depending upon Yatra season).

At Baan Ganga, there is a main Security Check Post, where you get Pitthu(s)/Coolie(s) to hire, who help you to get your luggage to the Temple. And also you can hire Horse and a Guide for yourself to ride to the temple.
Ordinary fare for Horse: ₹760/- per person (from Baan Ganga to Vaishno Devi Temple (Bhawan). For Pitthu’s charges are ₹500/-(28kgs to 40kgs) from Baan Ganga to Bhawan (Main Temple).
The best way to start your yatra is by moving on your feet. The total distance of yatra from Baan ganga to main temple is of about 12 km to 14 km. The first main point is Adhkawari after 6.5 km from Baan Ganga.
There are many points in between like bathing ghat, Charan Paduka (where Mata Vaishno Devi’s Footprints were found and it has been worshiped) and many refreshment points for pilgrims. Adhkawari means that you have covered half of your Yatra.
At Adhkawari you have to go through a cave (gufa) i.e. “Garbh June Gufa”. For which you have to take a Group Number Parchi (receipt) from a Counter placed at Adhkawari only. Again there is NO cost for this receipt/parchi. Once you get your group number, then you have to wait for you group’s turn to enter the cave and worship there. After you have been through the Garbh June Gufa, you have 2 ways to cover the rest of your yatra.

If you choose the 1st way (The New Way) then you also get the facility of electric Auto rickshaw from Adhkawari to Bhawan/Main Temple. The auto rickshaw facility is only for Children and Old Aged Pilgrims. And Horses are not allowed on this way. This new way goes directly to Bhawan/Mata Vaishno Devi Temple.

If you choose the 2nd Way (The Original Way/The Horse way) then you have to go through a longer and difficult route which also covers “Bhairo Temple”.

In the new way you will find refreshment points like: Himkoti, Saket etc. and in the Horse Way you may find the points like: Hathi Mathha and Sanji Chhat (Helipad Point).

Finally you will reach Mata Vaishno Devi Temple. You have to buy Prasad(chadhhava)/Bhaint from the Shrine Board’s Bhaint Counter (price for bhaint: ₹20/-, ₹30/-, ₹40/-).
After reaching there, you have to get your group number for Main Temple Darshan by showing your Yatra Parchi (receipt) at the Shrine Board’s Counter at Bhawan.

When you get your group number, wait for your Group’s Turn to enter the temple. Then enter the temple and cave, inside the temple you will get a token for prasad(chadhhava) and have Darshan over there. After you come out of the cave then you can have holy water (charnamrit) and also prasad and nariyal (coconut) from various shrine board’s counters by submitting the token that you got from the Temple’s Pandit.
After Darshan, you can rest at any Guest House at Bhawan or you can continue your yatra to “Bhairo Temple”. To rest at Bhawan, you have to get your room/dormitory bed(s) pre-booked online (atleast 1 week before from yatra – www.maavaishnodevi.org) or you can have a room booked for Main Temple Bhawan from Niharika bhawan(at Katra) before starting your yatra. Otherwise, if you don’t have a room booking you can have blanket(s) from the blanket counter to rest at bhawan’s floor. (The blanket(s) is free of cost, only you have to deposit the security amount of ₹100/- per blanket viz refundable). Temperature at bhawan varies from (-5’C in winters to 25’C in summers).
Then yatra for Bhairo Temple is of About 2kms from the Bhawan. You can also have a horse to ride to Bhairo Temple.
It is believed that without Darshan of Bhairo Temple the yatra could not be completed. After you have Darshan at Bhairo Temple, then you can complete your yatra by coming down to Baan Ganga (The Starting Point at katra) by a way viz direct from Bhairo Temple to Baan Ganga (katra). – about 14 km.
YATRA COMPLETE

From Jammu Tawi Railway Station you can reach any part of India by The Indian Railways.