A Failed Trip to Deoriatal Chopta 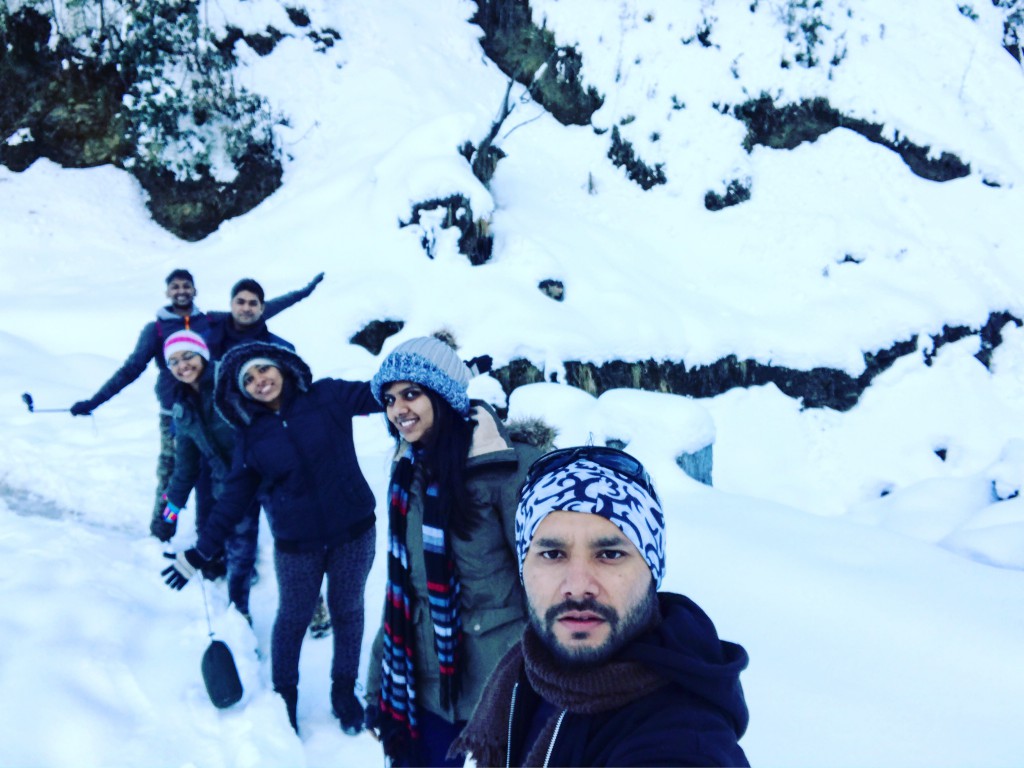 What if your trip gets canceled due to bad weather or you stuck in the midway and cannot reach the destination? Well, for a traveler like me, it would be the worst thing.

As the saying goes, “it’s not about the destination, it’s about the journey that matters” and it exactly happened that way on my trip to Deoriatal Chandrashila during the Holi weekend. Sometimes uncertain things give you much pleasure and fun. So technically, it was a failed trip but also one of the best trips I have ever had.
We were 6 strangers, met at Akshardham metro station for the first time and from there we started our journey. The trippers included me, Gaurav, Himanshu, Swati, Akansha, and Shweta. Had an introduction and got ready to board the taxi. Apart from all of us, there was one more person who played a major role in making our trip memorable and adventurous and the person was the driver (Sardar Ji) 😛.
Our original itinerary was
Day 0: Drive to Sari village
Day 1: Reach Sari and Trek to Deoriatal
Day 2: Trek down to Sari and drive to Ukhimath
Day 3: Drive to Chopta and trek to Chandrashila and drive back to Ukhimath
Day 4: Drive back to Delhi
At Akshardham metro station, we had a discussion and altered the itinerary a bit.
Day 0: Same
Day 1: Same
Day 2: Trek from Deoriatal to Chopta
Day 3: Trek to Chandrashila and drive back to Ukhimath
Day 4: Same
Now let’s see which itinerary we actually followed
We started our drive towards Rishikesh at around 10 PM. Initially, we were little hesitant to interact with each other but thanks to all the girls, who turned the atmosphere friendly. In just one hour, we were feeling quite comfortable and having fun in the car. We had our dinner near Modinagar and just after that, we got the first dose of adventure. The driver was feeling sleepy and he was continuously driving. I already asked him to inform me if he feels sleepy, but he didn’t tell. Unfortunately, he got a gust of sleep and the car went off-road by hitting a big stone on the way. The good thing was that everyone and the car were okay. We all got little scared after this incident so decided not to sleep. Then it happened again and this time our car was about to hit a divider but fortunately, it didn’t happen.
After all this, I forcibly asked the driver to pull over the car immediately. He took the rest for about 1 hour and then we resumed our journey. The weather was also not clear and soon it started raining heavily. It rained only for some time and we reached Muni Ki Reti situated just after Rishikesh where we had tea and some refreshments. The further drive was throughout the mountains and the weather was still not clear. We were driving towards Devprayag and saw a landslide amidst the way. That time we got a surety that the weather is not good to go but we decided not to abort our journey as we all were super excited.
We reached Devprayag and had a small photoshoot at the confluence of rivers Alaknanda and Bhagirathi. We then resumed our drive towards Rudraprayag and our car got punctured and that was a usual thing in the journey. But the unusual thing was that driver didn’t even know how to bolt out the Stepney from the car. We were in the middle of the trip and we couldn’t do anything so we asked help from other drivers. Finally, one person helped us and we successfully fixed the Stepney tire. We already wasted so much time due to all this so we decided to drive continuously until we reach the Sari village.
As we crossed Rudraprayag and moved towards Sari, we started seeing the mountains having snow on their top. Our excitement reached its peak that time. We just wanted to say to the driver that get us to our destination as soon as possible but we did not say, as this could be lethal for us.😛 We reached Sari village by 3 PM, quickly had our lunch and started our trek to Deoriatal. The trek to Deoriatal is just 2.5 km long from the village.

As we began, it started snowing and we were literally enjoying the trek. The trek was easy and the trail was mild uphill and totally paved. It did not make us tired. Just after half an hour of walking, we got amazed with Rhododendrons. The route was giving a view of a scenery. The trail was partially covered with snow and trees on both the sides having Rhododendrons. We also played with snow and had a great time on the trek. Reached the lake when the sun was about to set down. The lake and the surroundings were covered with the white blanket of snow. We hadn’t expected this much of snow. The night was too cold and the snowfall continued until the dawn. In spite of having shade, our tents got covered with a thick layer of snow till the morning. 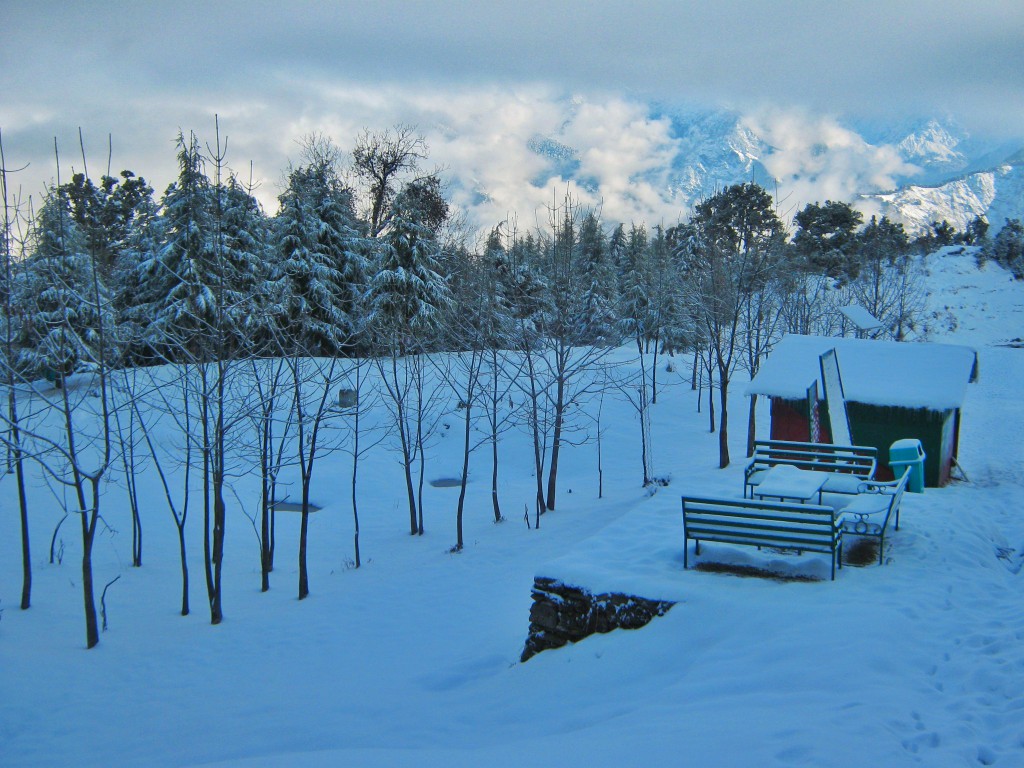 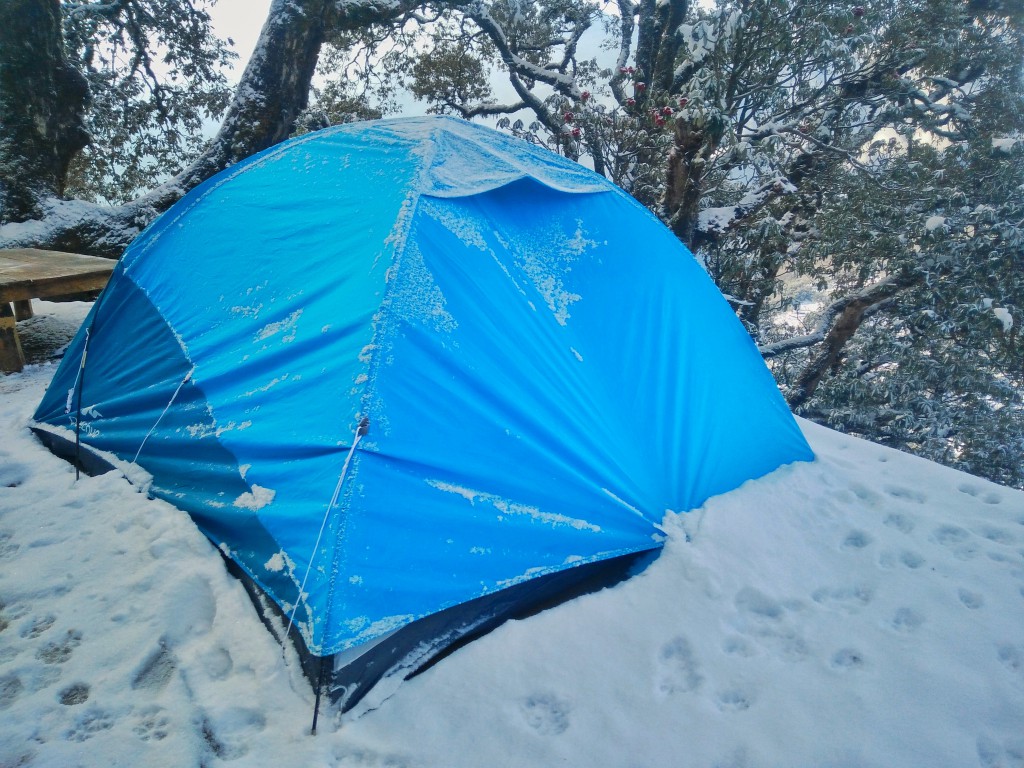 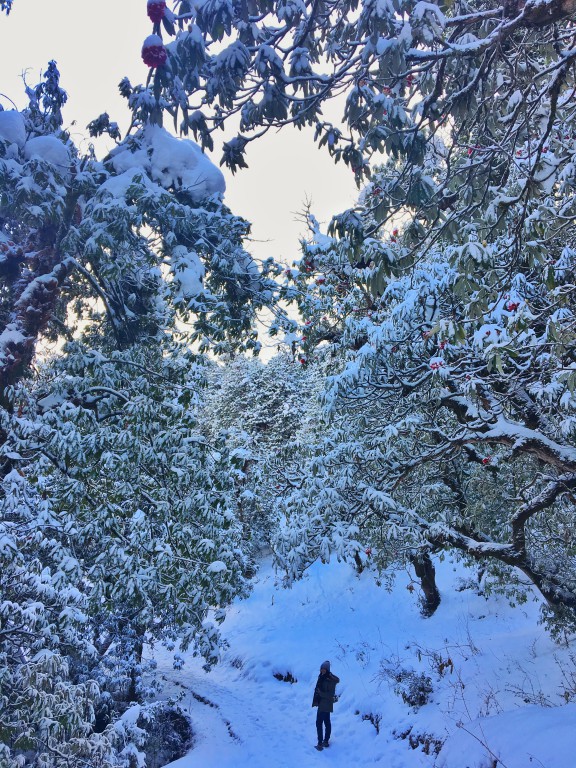 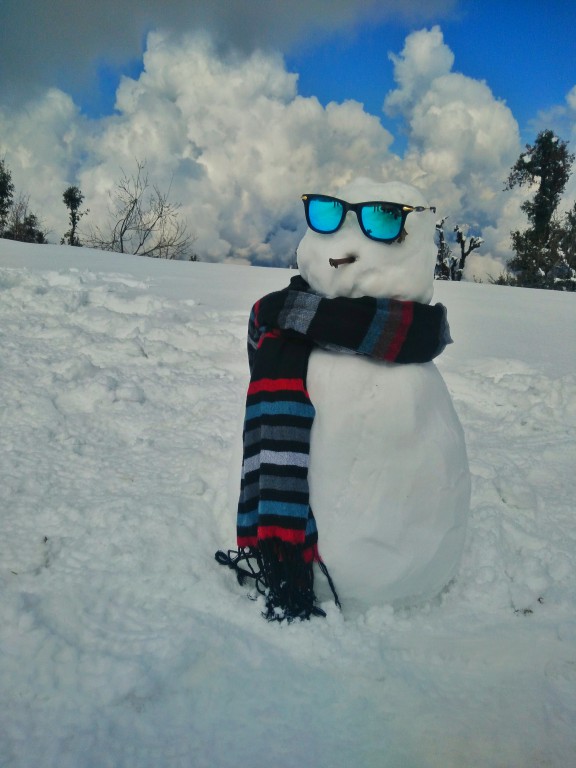 We woke up and saw that the weather was clear. We had our breakfast and spend some time near the lake. We asked the guide about the trek route to Chopta and he turned us down. Due to heavy snowfall, the route got blocked and it was next to impossible thing to trek through the same. He also added that Chandrashila summit would not be possible due to snow. It was a sad moment for us but we quickly changed our mood and decided to enjoy that place and visit the place which was feasible for us. We discussed and took a call to trek down to Sari and drive to Chopta. It took us hardly 1 hour 30 minutes and we reached the village.
We looked out for our car and found what that the driver was one bottle down and sleeping. It took us half an hour to wake him up and finally, we started our drive towards Chopta. The worst thing with our driver was in spite of having bad skills of driving, he was not at all serious in it. Whenever we used to offer him something to eat, he just left the steering and started taking it without noticing about the car direction. Seriously, it was quite risky to travel with him but we did not have another option.

When we were moving towards Chopta, we started seeing snow on the road. People told us that we could go up to Duggalbitta, which is 10 km before from Chopta. We decided to park our car at that place and walk all the way to Chopta from there. After that point, the road was fully covered with snow and it was impossible to drive on it. The road got too slippery, so we asked the driver to wait for us there and we started walking towards Chopta. The view was amazing there. The roads, trees, huts, milestones, everything was covered with snow. As we were approaching, the depth of snow was increasing and it was getting a bit tough to walk. We walked around 4 km and decided to turn back and started moving towards our car. We then drove back to Sari village and did our night stay there. 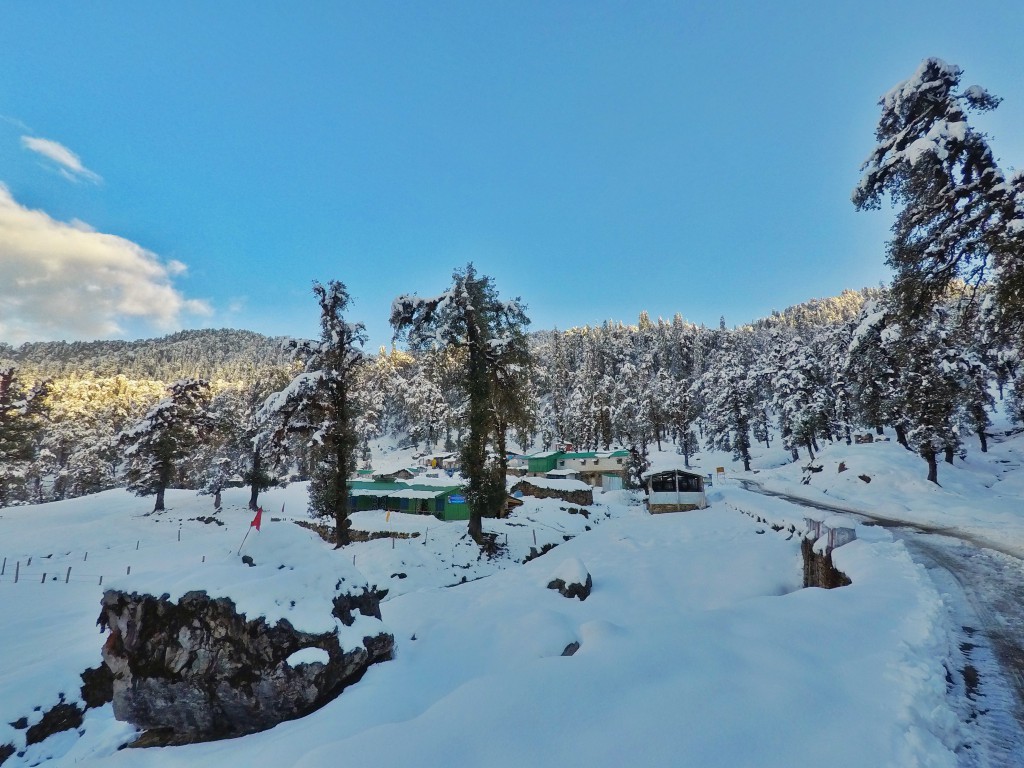 Now we were left with one day and had nothing to do as every place was blocked with snow. So we again had a discussion and decided to drive back to Rishikesh and do rafting there. We had a good dinner, packed our bags and slept.

Next day, we woke up and asked the driver to get ready in an hour but we got late due to his laziness. We started our drive by 7 instead of 6 AM. It took us around 6 hours and we reached our campsite in Shivpuri, Rishikesh. Our rafting was scheduled in the evening and I was super excited as it was the first time I was going to do rafting. We did the 17 km long rafting from Shivpuri to NIM Beach. The experience of Rafting was exhilarating. It was a real adventure for me as I had never been to any water park and also I did not know swimming. In the end, we also did Water Surfing and Cliff Jumping and later boarded the taxi to get back to the campsite. 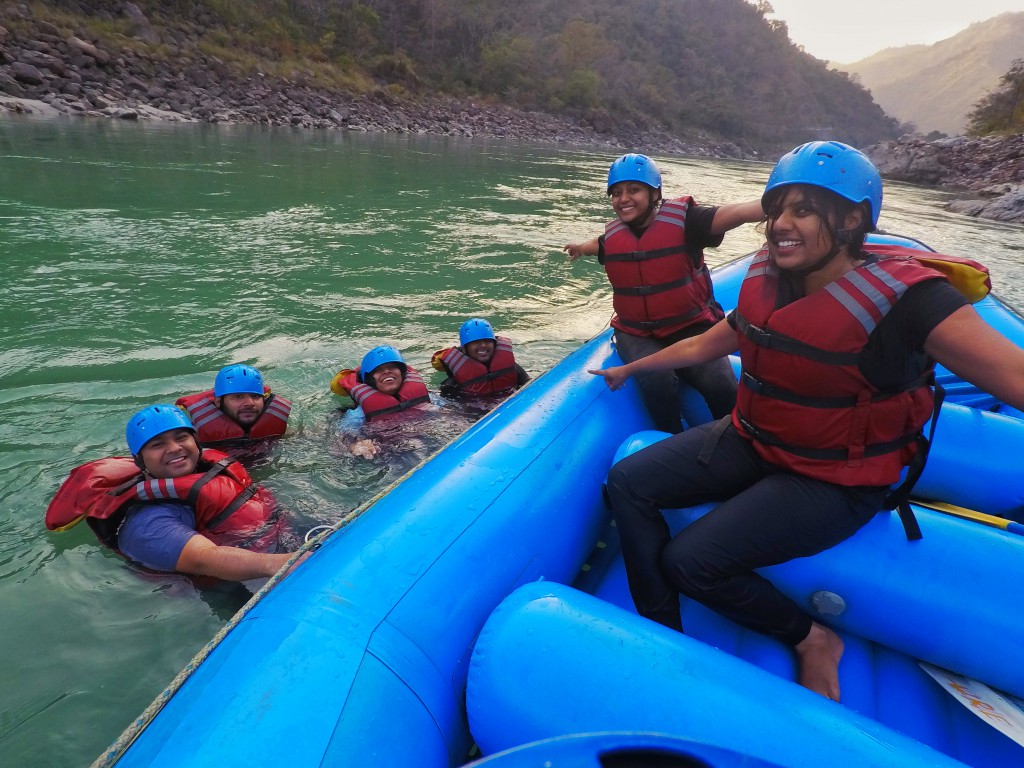 The taxi dropped us at the main road and from there we had to walk around 2 km along a river stream to reach the campsite. We were totally wet, looking for our campsite and we got lost due to the confusing trail. It was totally dark and we did not even have phones with us. By somehow, we contacted the guy in the campsite and asked the correct way. After all this, we did bonfire with delectable dinner and called it a day. Next morning, we departed for Delhi and reached there by evening.

Though there were so many glitches in the trip and everything was unplanned and uncertain but only because of all this we all had really a great time and enjoyed a lot. It was one of my best trips ever. 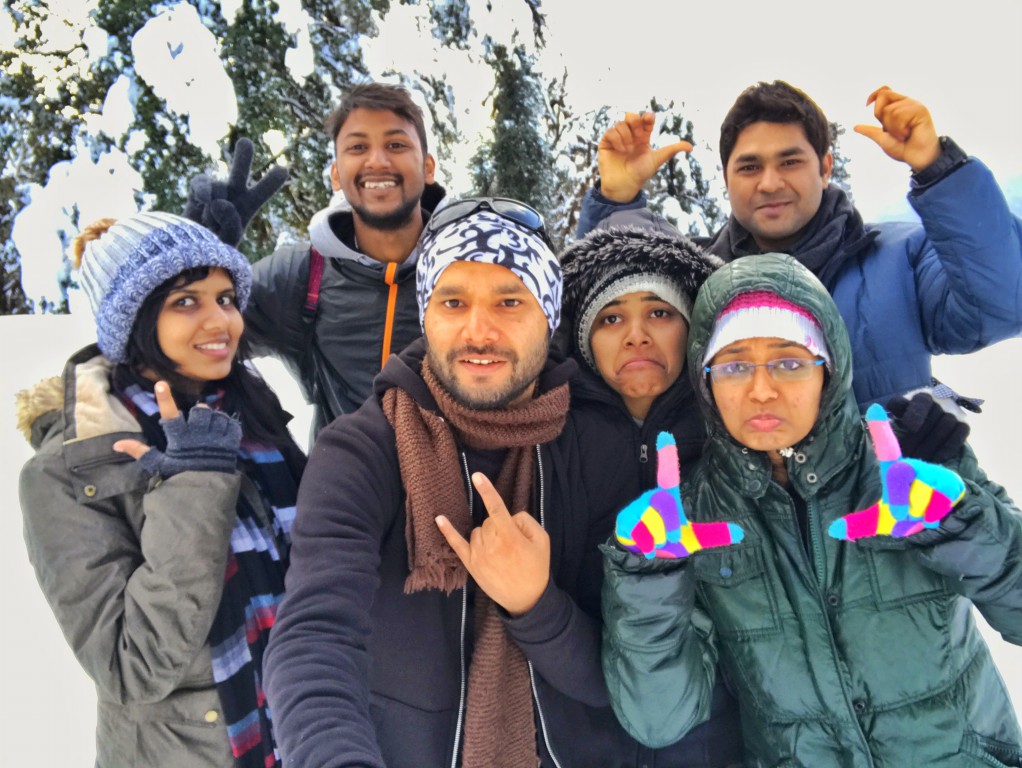 Cheers to all and Sardar Ji 😊