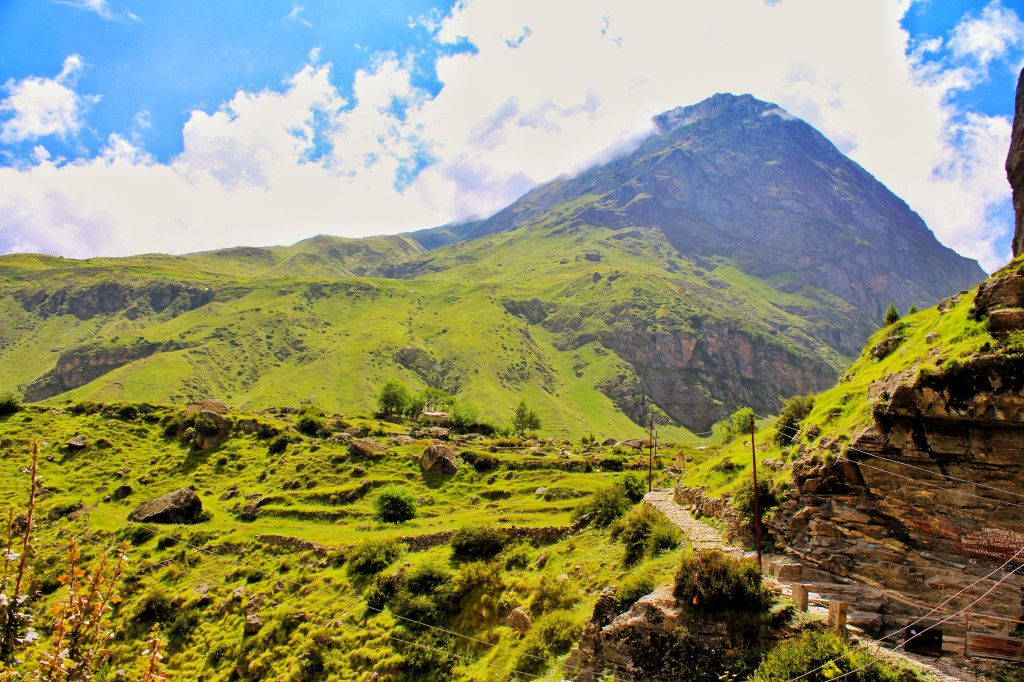 Woke up with a fresh and cool morning after the last night heavy rain. We quickly freshened up and got a thrilling news from one of the local persons from the staff of GMVN. He told us about the last night incident of a bear. Yes, the person spotted a bear inside the area of GMVN last night. We hadn’t noticed because we were sleeping. However, the good thing was that everyone was safe and the bear ran away.
We had our breakfast and got ready for our trek to Hemkund Sahib. We started the trek at 9 AM. The Gurudwara is situated at a distance of 8 km from the village. However, on every signboard, the distance is written 6 km but it is wrong.

We took the same upwards route from the village and trekked up to the check post. From there, we took the straight route and moved towards steep trail of Hemkund Sahib. As we moved, we were welcomed by a waterfall falling from a mountain. After crossing the waterfall, we took a left turn and continued our trek on the zig zag path. The trail was quite steep and tiring. As we were gaining height, the weather was also getting changed and it was changing dramatically. At sometimes we were inside the clouds and at some, we were enjoying the sunlight. 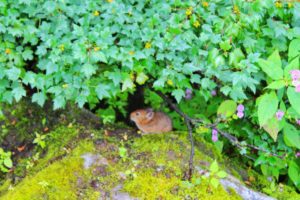 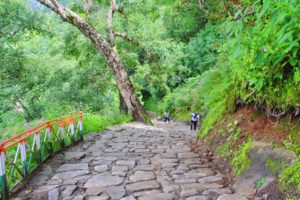 It took us 4 hours to cover 7 km and we reached a point from where there were two routes, both were going to Hemkund Sahib. One through stairs (shorter one) and another one through a steep trail. We relaxed at a shop for a couple of minutes and decided to trek through the trail. It took another 1.5 hours to cover the last leg of the trek which was of 1 km.

We reached the Gurudwara at around 2:30 PM and got the news that the Gurudwara has been closed. As the saying goes “hard work never goes in vain” so it happened exactly in that way, we talked to one of the care takers and he permitted us to visit inside the Gurudwara. The interiors were very beautiful and the place was so peaceful. 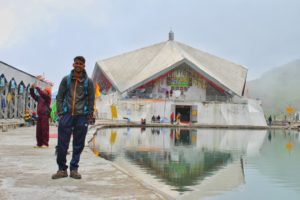 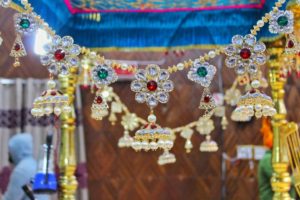 Hemkund Sahib is a Gurudwara situated at an altitude of 4630 meters (15,200 feet) above the sea level. The Gurudwara is one of the most sacred places for Sikhs in India and is dedicated to Guru Gobind Singh (tenth Sikh Guru). According to local stories, Guru Gobind Singh practiced meditation here. Besides the Gurudwara, there is also a glacial lake and a temple devoted to Lord Lakshman (younger brother of Lord Rama). The Gurudwara is encircled by huge mountains. Besides the Gurudwara, there is also one glacial lake in which pilgrims usually take a holy bath. The views from Gurudwara are breathtaking and one can spot the mighty Nilkanth peak during lucid sky. During monsoons, the Gurudwara region is filled with a flower called Brahmakamal. The flower is very rare and is used for several medicinal purposes. It is only found in the parts of Uttarakhand in India. 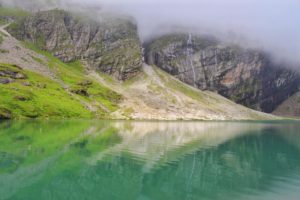 Later we had our lunch in the langar and started descending towards the village. It took around 2 hours 30 minutes to reach Ghangaria. We explored the whole village as it was our last night at Ghangaria. We had to leave early morning for Govindghat so we packed up all our belongings and slept. 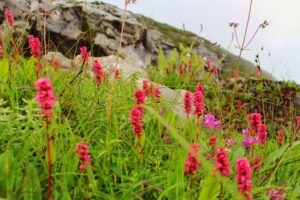 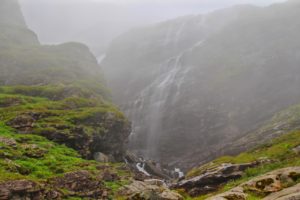 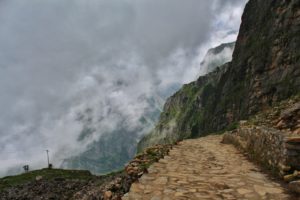 We started our trek at 7 AM and it took us only 2 hours to descend a distance of 10 km. We did not trek while coming down, we jogged all the way and reached Pulna at 9 AM. Then took a taxi to Govindghat and after reaching there, we just put our rucksacks in the room and started looking for a taxi to Badrinath. We decided to take the bath at the hot water springs of Badrinath. As there were fewer tourists, the taxis were also less frequent. We found two folks from Gurgaon and they joined us as they also wanted to go Badrinath and Mana. We hired a taxi to Mana and Badrinath for INR 1200. It was a little bit costly but we did not have any other option. The road from Govindghat to Badrinath was scenic and we were driving along the Alaknanda river.

Badrinath is situated 20 km from Govindghat and Mana is another 3 km far from Badrinath. Our taxi dropped us at Mana and gave us a time of 2 hours to explore the village.

Mana is a tiny hamlet and is popular as the Last Indian Village near the India China Border. The road ends at Mana village. However, there is a road that goes beyond from Mana village and ends at Mana Pass but only military personnel can go on it. One needs to have permissions from military to drive on that road.

The village Mana is also famous for several mythological stories such as Pandavas crossed this village on their way to heaven. Also, Mahabharata was also written here. Ved Vyas recited the Mahabharata and Lord Ganesha was the writer. There are places which are linked to these stories.

We moved towards these places and explored them.

Places to see in Mana: 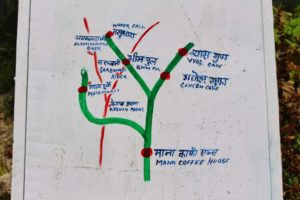 We first went to Bhim Pul. Bhim Pul is a bridge made by Lord Bhim (one of the Pandavas) over the Saraswati River. Bhim made the bridge to help Draupadi crossing the river. According to locals, the Saraswati river originates here and goes underground. The river comes out at Allahabad and is mixed with Ganges River. The mythological story behind this phenomenon is that when Ved Vyas was telling Mahabharata to Ganesha, the Saraswati River was making noise due to which it was getting inconvenience for Ved Vyas to tell. He ultimately cursed the river to go underground.

We also saw the footprints of Bhim or Bheem (claimed by locals) on a mountain wall. After all this, we visited the caves. We did not go to see the Vasudhara falls as it was 5 km away from the village and it can be reached by only trekking. We dropped it and started exploring other things. We bought many Himalayan herbs such as Kedar Kadvi, Vajradanti, Jamboo Khara and some more (forgot the names). We were also looking for a local liquor made of rice as we were told by someone that villagers make it here. The local name was “Kachhian”. We asked some shops and women about the “kachhian” but they said no to us. Later we moved towards Badrinath and got ready for our bath. 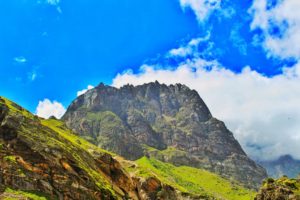 As we entered the temple premises, we just looked out for the bathing area and proceeded towards there. The water there was so hot but it was fun and quite relaxing. We were taking too much time to bath because we were enjoying, but then a priest told us that it is not advisable to bath for more than 2 minutes. The water has some nutrients which will affect your brain and you will faint down. After listening to this, we quickly came out and got ready for the darshan. We had our lunch at a restaurant called Hotel Urvashi. The food was good there. We came back to Govindghat in the evening and winded up the day early.

We got ready by 5 AM, as we had to catch the early morning bus to Rishikesh. The bus came but we had to miss it because there was no space. We waited there till 8 AM for next bus by sitting on the road but unfortunately, no bus came. We also tried asking lifts to some people but we did not get any. Then we decided to break our journey. We took a shared taxi to Joshimath and from there we again took a shared taxi to Chamoli. From Chamoli, we finally got a bus to Rishikesh and then we continued our journey. We reached Rishikesh in the evening and after having dinner, we boarded the bus to Delhi.
Reached Delhi in the morning.
Trip Ended.
Well, I always say, weather and your companions are the two most important things that can make your trip memorable from an ordinary one. From Day 0 to Day 6, we got a very nice weather. One can barely expect this weather on mountains during monsoon season. We only faced rain during the night so it did not cause any inconvenience to us. It was a great place and we had a great trip J
Day 0 & 1
Day 2 & 3
Day 4, 5 & 6 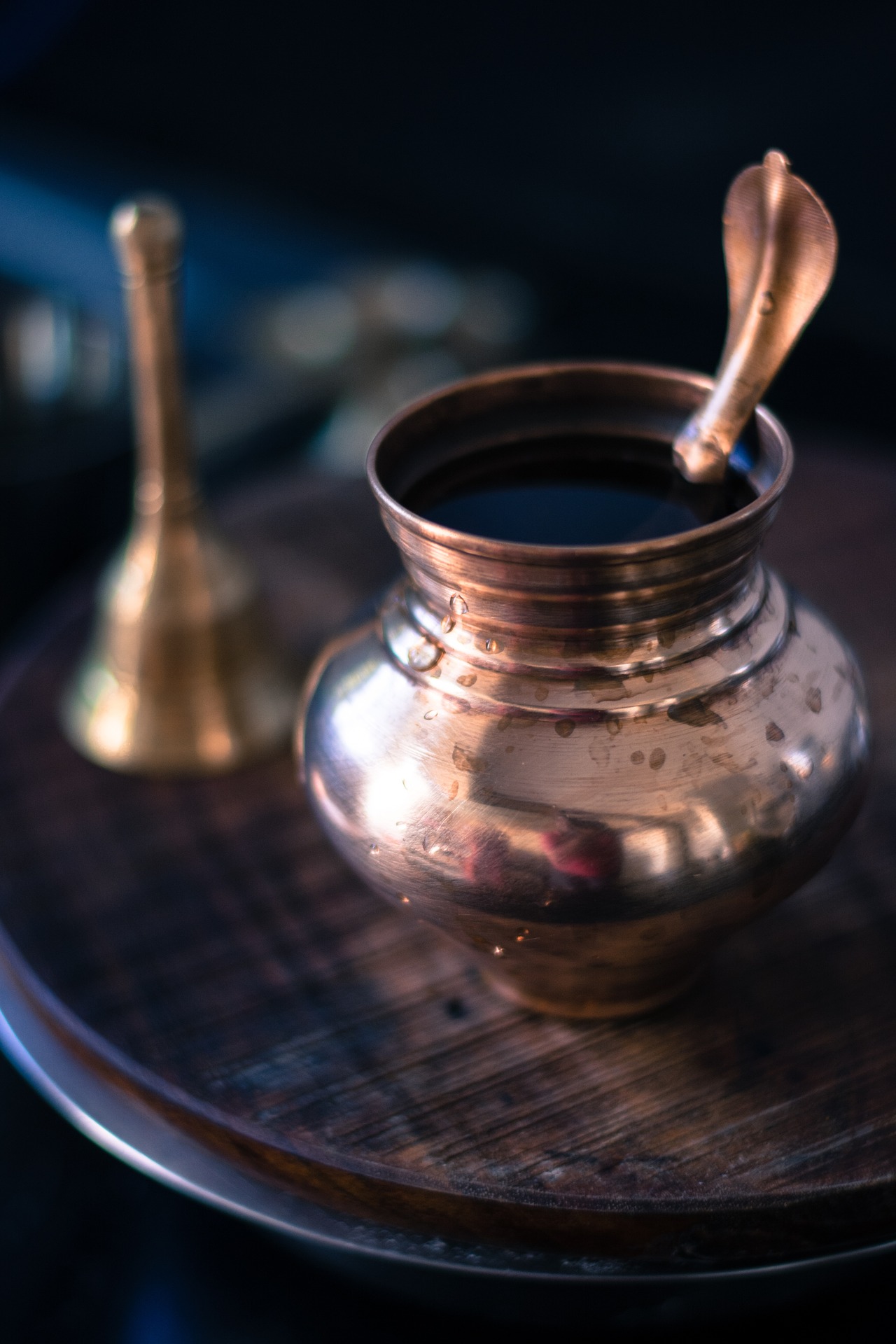