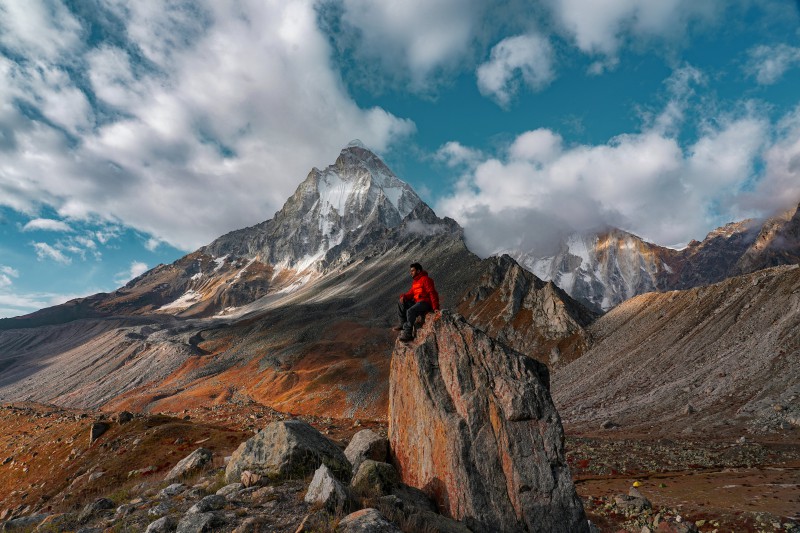 We woke up to a beautiful morning, having magnificent views of Bhagirathi massif straight from the tent window. The best thing in the morning was washing the face with icy cold water of the Bhagirathi River. We all got freshened up, had our breakfast, and winded up the campsite to leave for Tapovan. Initially, we had a plan to visit Gaumukh first and then to Tapovan but we decided to skip the Gaumukh and planned to cover it while returning. We took our rucksacks and moved towards the trolley.

A few years back, there was a route that used to go along the left side of the river up to the Gaumukh glacier. That route got destroyed due to a massive landslide and because of that the forest department set up a trolley to cross the river and created a new route towards Gaumukh glacier and Tapovan. Due to the friction and weight of the iron container, the trolley required a good amount of force to pull. First, our porter crossed the river alone and pulled all the way himself, and then one by one, we all crossed it.

It took almost an hour to cross the river and then we continued the trek towards Tapovan, which was around 6 km from there. We took the trail and walked towards the glacier. The Bhagirathi massif was looking amazing and getting bigger as we were approaching. The trail was comparatively easy and not very steep until we reached the point from where we had to cross the boulder section and then a steep mountain to reach Tapovan. 3 km were covered and 3 km were left. We took a small break of around 15 minutes and enjoyed feeding raisins to alpine birds.

After all this, we tighten our laces as the most strenuous part of the trek was about to start. We began crossing boulders slowly and then negotiated a big mountain wall by using the pressure hold. We had to cross multiple water streams as well in which our shoes got wet. The further trail was quite steep with an inclination of around 45 degrees and the scree made the trail slippery. Climbing through that route with that weight was a real struggle. We all were panting like hell. Slowly and steady, we reached the top and the best moment arrived. There was Mt. Shivling in front of us.

Do you know what is the best thing on a trek? When you are panting and tired like hell and struggling for the last 5-6 hours to reach your destination, you just have one thought in your mind and that is “How would be the view from the top?” That excitement pushes you to walk/climb and then once you reach, the view makes all the struggle and efforts worth or even more than worth.

We just took the support of a big boulder and stopped for a few minutes to admire the beauty of that mountain. There was no one except us and the place was full of solitude. The chilled breeze was flowing through our ears and it seemed as the mountain was greeting us and welcoming us. We then continued our walk and searched for a plain and perfect land to pitch our camps.

We then just relaxed at our campsite and had chit-chats inside the camps after having dinner.

Tapovan is a vast meadow perched at an altitude of 4300 m having scattered bushes, mud, and boulders. It can be the perfect campsite for anyone as the place has ample plain land, a freshwater stream (Akash Ganga), and yes super amazing views that will take your heart away. You get views of Mt. Shivling (6,501 m), Mt. Meru (6,660 m), Mt. Bhagirathi (6,856 m), a birds-eye view of the entire Gangotri glacier & moraine part, and a couple of other mountains.

Check out the cinematic video of our trek, shot & edited by Nilmani Parth

Today was a relaxing day as we decided to stay at Tapovan only and do a small trek up to Meru viewpoint. So it was kind of a lazy morning for us. In the morning, we roamed around and spent most of the time outside taking a sunbath. Later in the afternoon, we moved towards the Meru Viewpoint which was a short hike but it was quite steep and through the boulders. It took around 2 hours to reach the top. Unfortunately, we couldn’t get the complete view as it became cloudy. So after spending some time, we descended down to our campsite and did some astrophotography.

Trek from Tapovan to Bhojwasa via Gaumukh

We woke up a little early and had a short yoga session, which was certainly one of the best things. Later we packed up and began moving down towards the Gaumukh Glacier, the source of Bhagirathi river. The initial downhill trek was going to be a little difficult due to steepness. We descended down slowly with the correct postures and by maintaining the balance. After crossing the steep patch, there came a crevasse that we had to cross. Though it was a small open crevasse but we did not have any equipment with us so we had to cross it carefully. The guide found the easy route and helped us in crossing that crevasse. That stretch was a little dangerous as the entire moraine section was moving. We were strictly advised by our guide to not stop at any place and move continuously. We followed the same and reached Gaumukh.

We almost spent an hour there listening to the beautiful noise of the Bhagirathi river. We had our lunch there and then proceeded towards Bhojwasa, which was our destination. Now our rucksack weight was less and the further trek was downhill, so it was quite easy for us and we were moving freely. By evening, we reached the trolley point and crossed the river. Initially, we 3 (me, Himanshu, and guide) crossed it and then started pulling Nilmani and the porter. While we were pulling, the rope got entangled into the pulley and the trolley got stuck in between over the Bhagirathi river. Nilmani and the porter were shouting continuously but we were not able to hear a single word due to the river noise. After struggling for half an hour, they finally got able to traverse and crossed the river. We then had our dinner and slept early as we already set an alarm for 3 am to do some astrophotography.

The alarm rang, we put on our jackets & shoes and got out of the tent. The sky was amazing and lucid as we expected. Nilmani and Himanshu started clicking pictures and I was looking 360 degrees for any wild animal with the help of a torch. While I was looking, I found 2 small lights shining in the bushes from a distrance of around 50 meters from us and it seemed like the eyes of any animal. I focused the torch there for a couple of seconds to find out whether its an animal or something else. Suddenly, the light got blinked twice and it was confirmed that it was an animal. I told Nilmani and Himanshu about the situation and we quickly took our camera gear and got inside the tent. The moment was scary and we couldn’t do anything. We just decided to be inside the tents and tried to make less noise as possible.

Trek from Bhojwasa to Gangotri

We woke up at around 8 am and told the last night situation to the guide and porter, and then we got to know that the guide also saw that animal last night. He confirmed that it was a leopard. We all were lucky that the leopard didn’t attack us. We then had our breakfast and began our last day trek towards Gangotri. We took some group photos and retraced the same route to reach Gangotri. The return trek took quite lesser time as our speed was quite good due to lesser weight. We completed the trek of 14 km in just 5 hours and reached our guest house.

Gangotri to Dehradun and depart for Delhi

Now it was the time to bid adieu the mountains and the Gangotri region. We boarded the taxi and began our return journey towards Dehradun. We took a stop at Ganganani to have a bath in the hot water springs and then reached Dehradun by evening. Later, we boarded the train to Delhi.

The trek was amazing and it was one of the best treks till now. Apart from the super amazing views, the best thing was that there was no one on the trek. The entire forest was empty and because of that it was a very raw experience for us.

Check out the amazing Vlog of our Gaumukh Tapovan trek, made by Nilmani Parth. 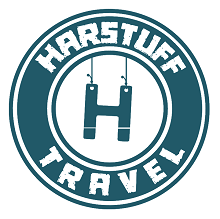 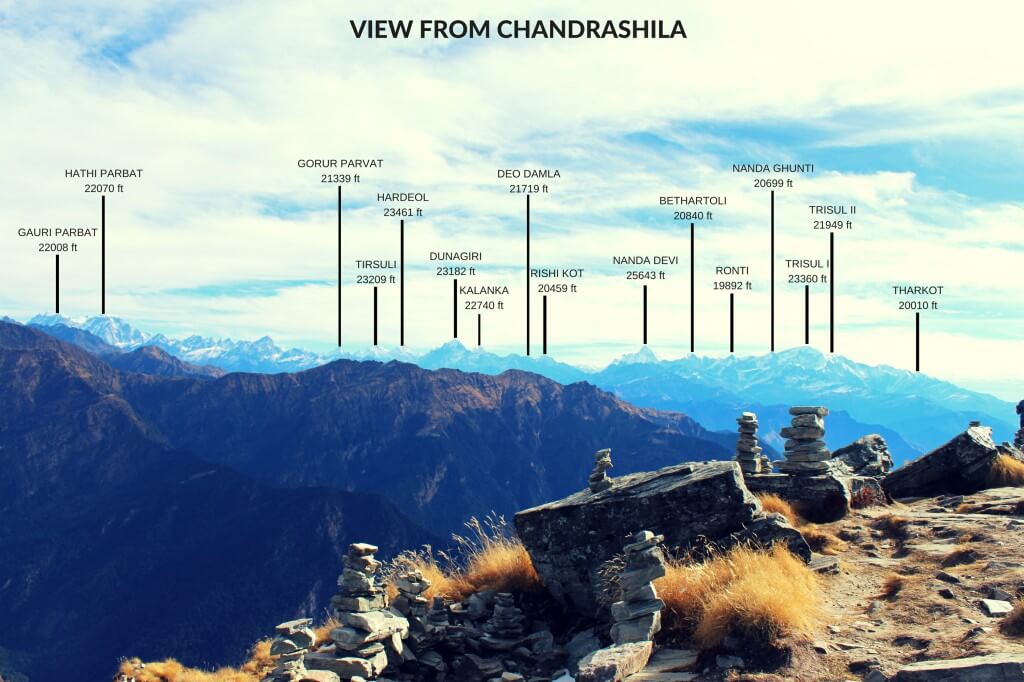 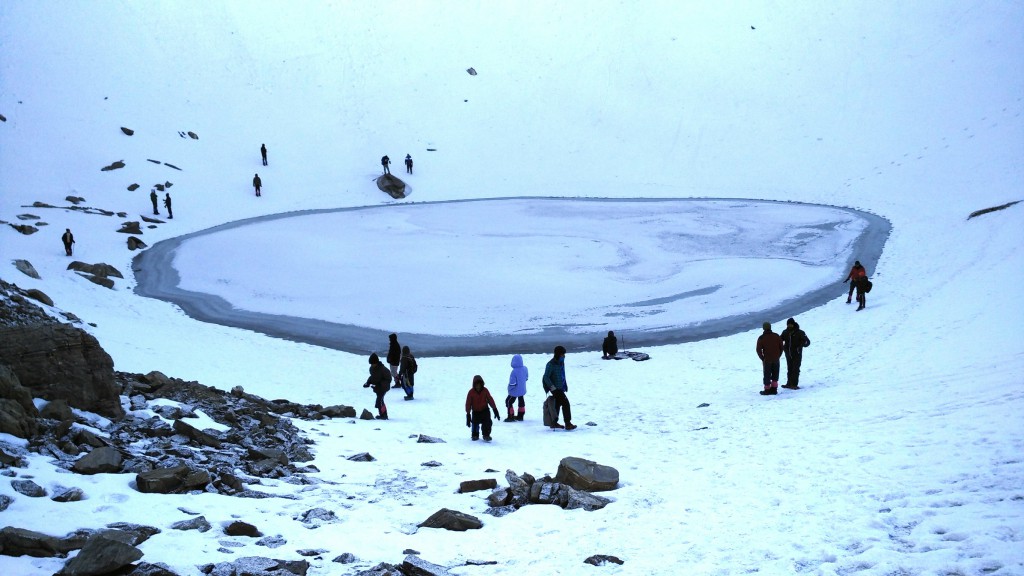