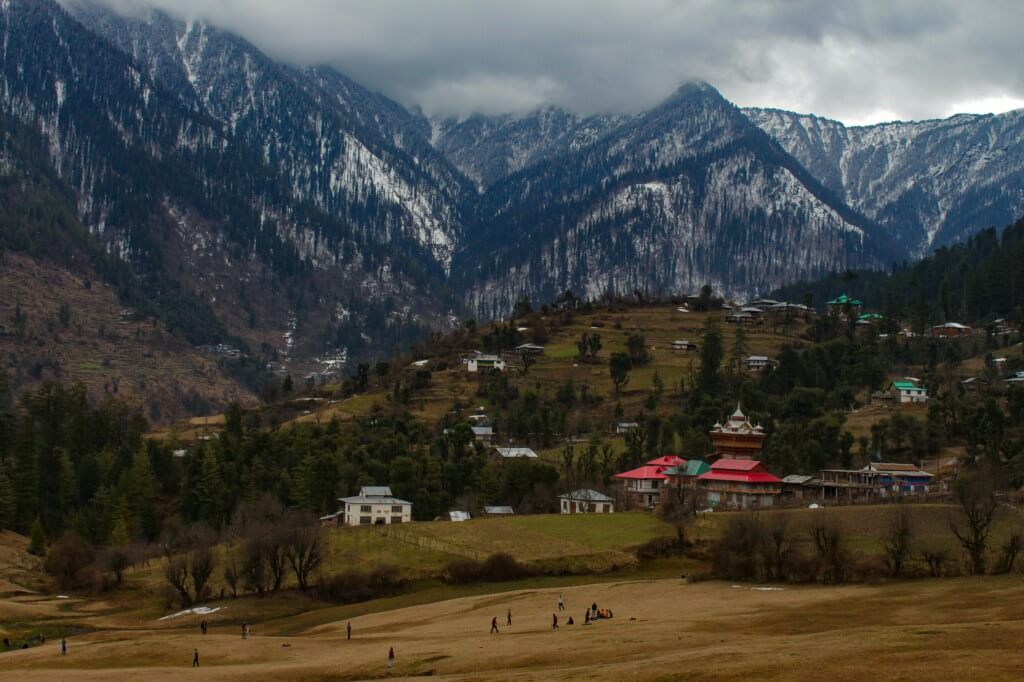 After exploring Jibhi, Jalori Pass and Rolla, now it was time to explore a new place which we’ve never heard of. We planned to visit Shangarh, a beautiful hamlet in Sainj Valley. After having an adventurous day, we got up a bit late. We all freshened up, went to see the homestay owner who helped us late night by allowing us to stay in his homestay and checked-out by noon. Then we met the driver and explained him about the route to Shangarh.

Shangarh is a tiny and lesser-known village having a temple of Shangchul Mahadev which is encircled by vast lush green meadows. One would definitely think of Khajjiar while exploring Shangarh as the views are similar. The village is situated in Sainj Valley in the Kullu district, settled at an elevation of 2100 m and can be reached by road.

We began our journey and proceeded towards Banjar by retracing the same route. We had our breakfast of Paneer paranthas at Banjar and from there we took a right turn towards Larji and then again took a right turn to enter into the Sainj Valley. The roads were wide and well laid out as compared to the roads of Banjar and Tirthan Valley. We were driving along the Sainj River, one of the tributaries of Beas river. After passing the entry gate of Parvati Hydro Power Station, we reached Neuli and then took a road going to Shangarh. The road was steep and there was no traffic on it.

As we were moving towards this tiny hamlet, the metalled road turned into unmetalled one and it was full of mud sludge. The driver warned us twice that our car doesn’t have the four-wheel-drive option and it can get stuck on that road so we shouldn’t go further. We ignored the driver and asked him to continue driving. After a couple of minutes, the road got worsened and it was nearly impossible to drive. Our car wasn’t able to move properly because the tyres were getting slipped due to sludge. At last, we decided to stop there and covered the remaining route by walk.

Shangarh was 4 km from where our car was parked. We took a shortcut and started climbing a mountain directly. While climbing we were facing short of breath as we were climbing fast but we reached in lesser time. The weather was cloudy and there were chances of rain so we decided to explore the place and reach back to our car as fast as possible. We crossed a few houses, climbed some stairs and there we arrived at a gorgeous meadow spread over a large area and surrounded by snowy mountains partially shrouded in the clouds. A Pagoda type structured temple was also there which is dedicated to Shangchul Mahadev, the local deity of Shangarh.

The beauty of that place can’t be expressed in words. It seemed as we were looking at a scenery. We also had a conversation with some locals who told us about the legend related to Shangarh, Sainj Valley. As per them, Pandavas created Shangarh meadows by purifying the soil to cultivate rice during their abandon period after Mahabharata.

We took a complete round of that meadow so that we could get a view of that place and capture it from each side. We also went inside the Shangchul Mahadev temple which was built on the meadow itself. The temple had beautiful carvings on the walls and the doors. The view from inside the temple was also magnificent. We took a plethora of pictures but still, we were not satisfied as the place was amazingly beautiful. Later, we started coming back to our car and then began our journey back to Delhi.

Shangarh in Sainj Valley was the most beautiful place we visited on this trip. Sainj and Tirthan Valleys are quite rich in natural beauty and are home to several gorgeous villages and trails. We are already planning to visit again.

Check out the previous parts here..

Gorges of Zanskar . Due to these deep gorges only