Home Uncategorized Amarnath
by Manu KhandelwalJanuary 18, 2015January 18, 2015Leave a Comment on Amarnath
Amarnath is the holiest place for Hindus in India. This temple is dedicated to Lord Shiva. The Amarnath Temple is located in the state of Jammu & Kashmir, approximately at a height of 3,888 m (12,756 ft). The temple consists of Amarnath Cave in which there is a hindu shrine existed. The shrine forms a important part of Hinduism and is considered to be one of the holiest shrines of Hinduism. The Amaranth Cave is visited by devotees each year for the darshan (pious sight) of lord shiva’s lingam, which is naturally formed with ice. It is believed that those who visit this place even for atleast once would go to heaven after their death. The cave is surrounded by snowy mountains. The cave itself is covered with snow most of the year except for a short period of time in summer when it is open for pilgrims. 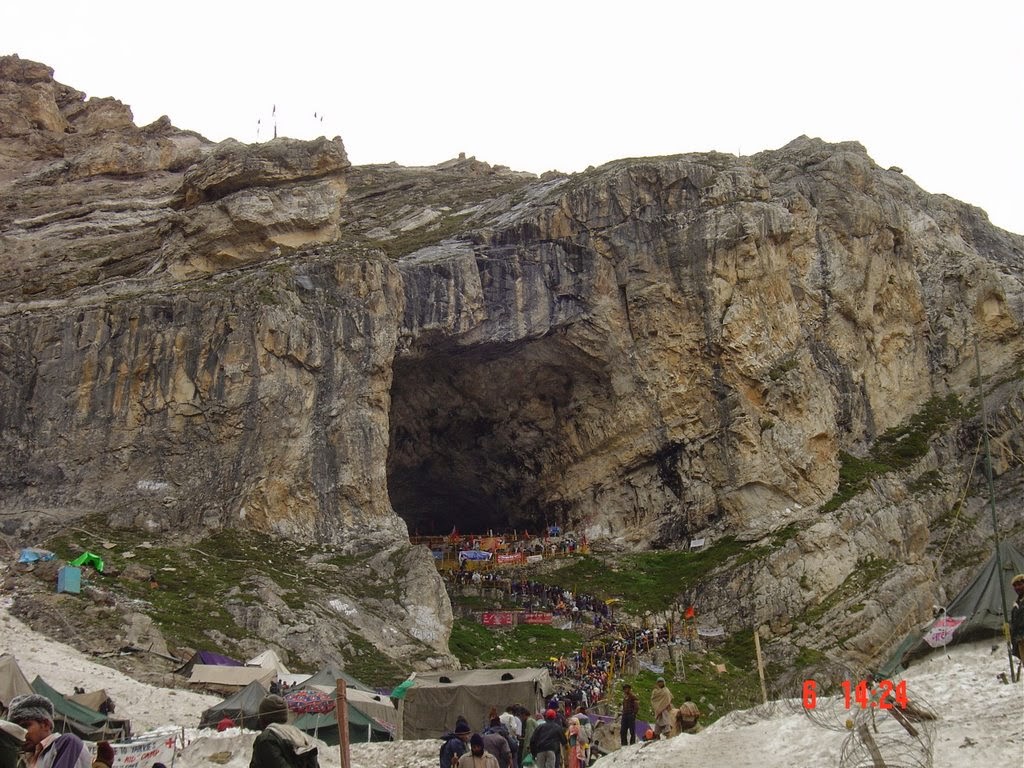 According to a Hindu mythology, this is the cave where Shiva explained the secret of life and eternity to his wife, Parvati. Two other ice formations represent Parvati and Shiva’s son, Ganesha.
Inside the 40 m (130 ft) high Amarnath cave, the stalagmite is formed due to freezing of water drops that fall from the roof of the cave on to the floor and grows up vertically from the cave floor. The Cave waxes during May to August, as snow melts in the Himalayas above the cave and the resultant water seeps into the rocks that form the cave and gradually wanes thereafter. As per the religious beliefs, it has been claimed that the lingam grows and shrinks with the phases of the moon reaching its height during the summer festival, although there is no scientific evidence for this belief.
Complete the holy journey to Amarnath and you will get Moksha, this is what is famous by all firm believers in Amarnath. This does not mean that only people who are interested in attaining Moksha should pay their visit to Amarnath. Every traveler is sure to have an amazing experience when they get in to this serene and 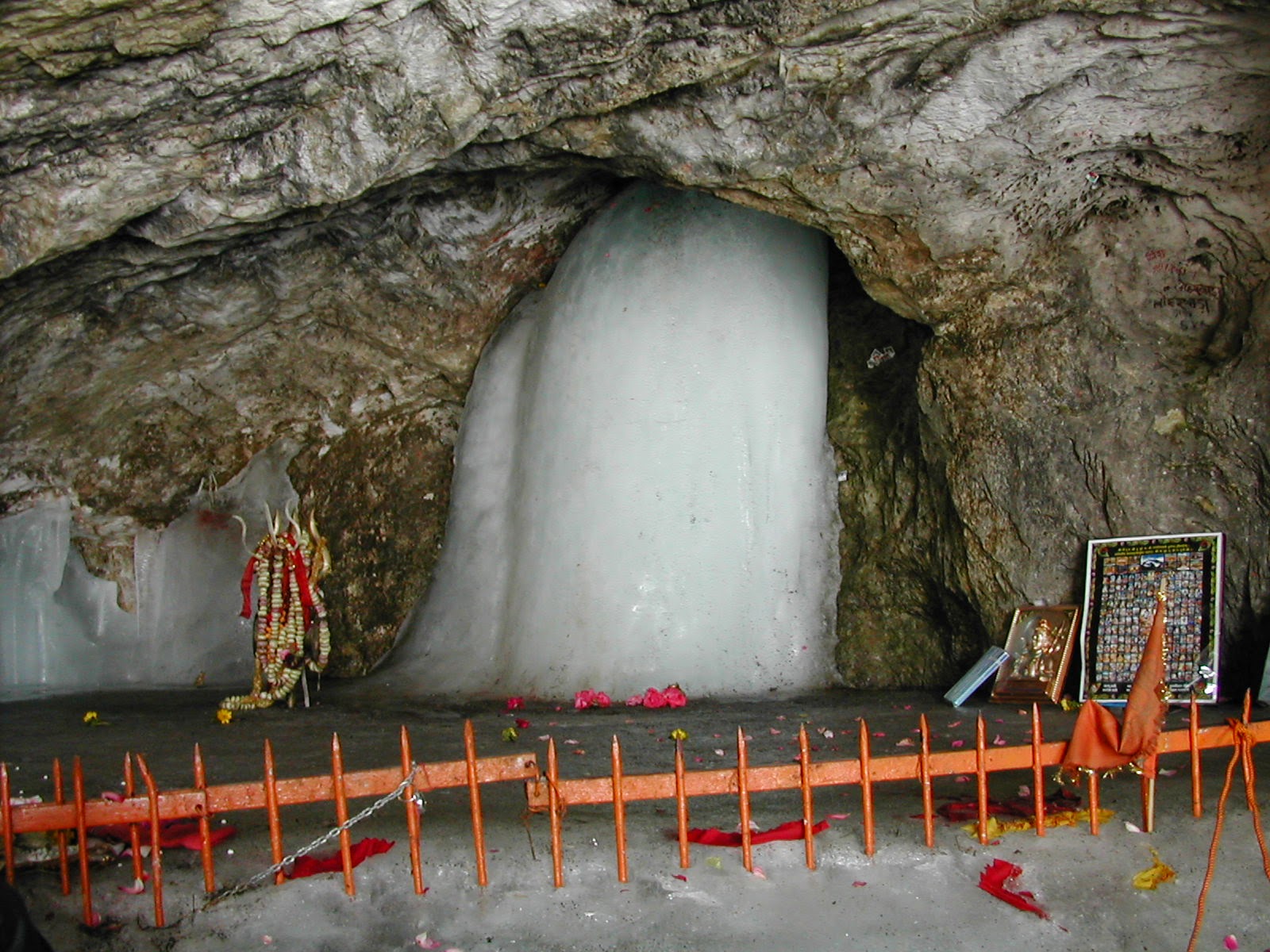 religious place. Apart from the Amarnath cave there are many other places that you can explore here.

There are majestic Himalaya peaks and amazing and beautiful green forests. Chandan wari is a place that will give all nature lovers a peaceful place where they would love to adore the beauty of nature. Sheshnag is a place which is hard to surpass when you visit Amarnath. For those on Amarnath Journey, sheshnag is a must visit place. There is a greenish blue lake and mountain with seven peaks. The pictures of mountain peaks looks like a mouth of sheshang and it seems like you are watching a sheshnag in front of you.
YATRA: Thousands of Hindu devotees make an annual pilgrimage to the Amarnath cave on challenging mountainous terrain to see an ice stalagmite formed inside the cave.
The temple is a popular yatra destination for only Hindus. Pilgrims visit the holy site during the 45-day season around the festival of Shravani Mela in July–August, coinciding with the Hindu holy month of Shraavana.
The beginning of the annual pilgrimage, called Amarnath Yatra is marked by ‘pratham pujan’ to invoke the blessings of Shri Amarnathji. Devotees travel on foot, either from Srinagar or from Pahalgam. The latter journey takes approximately 5 days. Devotees face problems due to extreme and unpredictable weather conditions, which may even cause shortage of oxygen. 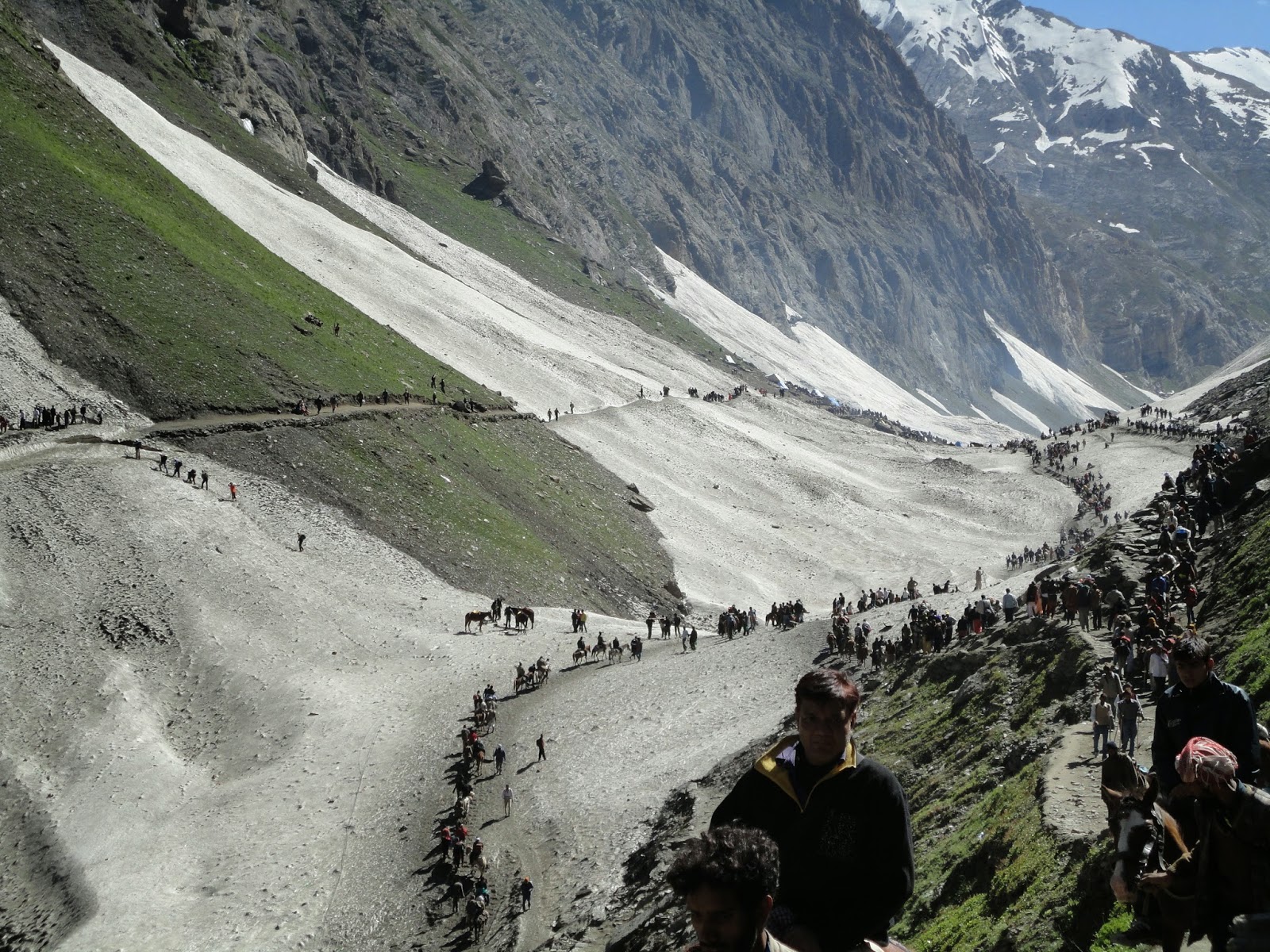 ROUTE: The shorter northern route is just about 16 km long, but has a very steep gradient and is quite difficult to climb. It starts from Baltal and passes through Domial, Barari, and Sangam to reach the cave. The northern route is along the Amarnath valley and all along the route one can see the river Amaravathy (It is more like a tributary of Chenab) which originates from Amarnath Glacier. Pahalgam route is better in comparison to Baltal route, it would be easy to trek on this route. 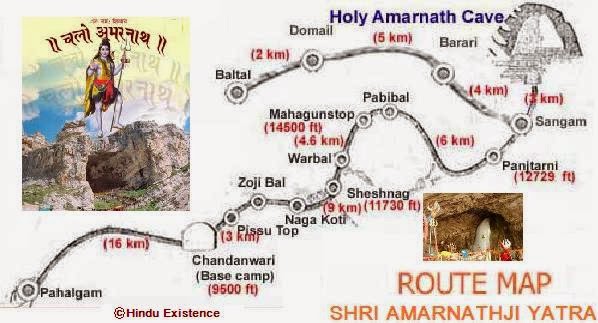 CLIMATE: The climatic conditions are very uncertain. Rain or snowfall may take place at any time or place during the Yatra. It is to be particularly noted that abrupt changes in temperature might occur. Sunny weather may turn into rain / snow fall in a short time. The temperature may fall upto -5 degree C.
FACILITIES: En route the cave, various non-profit organizations set up food supply and resting tents called ”pandals”, which are available for free to the pilgrims. Near the shrine, hundreds of tents which are erected by locals can be hired for a night’s stay.
Helicopter services from base camp to Panchtarni (6 km from the cave) are also available from various private operators.
Helicopter services are available from both Pahalgam and Baltal till Panchtarni. From there, you can either trek up to the cave or hire ponies or palkis.
However, the Pahalgam route is better in terms of providing facilities like accommodation and rest rooms. On your route to the cave, you will find many tea stalls and bhandaras (provisions of free meals).
There are tents set up by the localities which can be hired for rest or accommodation.
You can always call on the BSF(Border Security Force) and CRPF(Central Reserve Police Force) jawans and army men for any queries or help. They are spread thought the route for your assistance.
ACCOMODATION: Bhole Bhandari Charitable Trust (Regd.) provides tented accommodation & Community Kitchen (Langar) to  the pilgrims TOTALLY FREE OF COST. This year this service will be made available at Panchtarni.
Free accommodation is also being provided by other Non Government Charitable Organisations. However, J&K Tourism Development Corporation too provides tented accommodation and shelters at nominal charges.
DO’S & DONT’S:
DO’S:
1. Carry high calorie food items like chocolates and dry fruits to fight against the cold and as easy energy substitutes.
2. Trek extremely carefully, uphill or downhill, as even a minor carelessness can prove to be fatal.
3. A good pair of shoes and a stick for a comfortable trek are a must.
4. Carry needful warm clothings and wind shield.
5. Keep a slip  with your Name, Address and the name of accompanying yatri in your pocket.
6. Take a little relaxation on steep inclines and don’t exert yourself too much.
7. Carry some common medicines such as Glucose, Disprin etc. with you for immediate relief.
DONT’S:
1. Do not carry too much of baggage with you as it will only cause an inconvenience in traversing the strenuous way to the caves.
2. This journey is not advisable neither for those who are physically unfit nor for kids.
3. Don’t stop at such places which are marked by  warning notices.
4. Don’t take drugs during Yatra.
5. Don’t take oily / greasy / fried food during yatra.
6. Don’t attempt short cuts on the route as it is very dangerous.
NEARBY PLACES: You can visit Dal Lake, Nagina Lake, Shankaracharya Temple, Mughal Gardens, Raghunath Temple, Mahadev Mandir, etc.
HOW TO REACH AMARNATH:
BY AIR: The nearest airport to Amarnath is Srinagar. Srinagar is summer capital of Jammu & Kashmir. It is located at a distance of around 95 km from Pahalgam, the base camp for amarnath yatra. There are daily flights to Srinagar from Delhi and Jammu. On some week days flights also pickup  passengers from Chandigarh and Amritsar. From srinagar you can easily get buses & taxis to pahalgam.
Pawan Hans and Himalayan Helicopters also fly to Amarnath and can be booked through their official websites www.pawanhans.co.in or www.himalayanheli.com or www.onlineglobalhelicorp.com
BY RAIL: Jammu is the nearest Railway Station. Jammu is winter Capital of Jammu & Kashmir. It is located at a distance of around 290 km from Pahalgam. It is well connected with all stations of India. The distance between Jammu to Pahalgam can be covered by Taxi / Buses. These are  available at Tourist Reception Centre, J & K Govt., Raghunath Bazaar only early in the morning. For any information about trains visit our blog harstuff-railway.blogspot.in.
BY ROAD: Jammu and Srinagar are well connected through road. Buses and Taxies are also available for this part of the journey .These can be hired on daily as well as full tour basis.
The cave is 363 kms from Jammu via Pahalgam and about 414 kms from Jammu via Baltal.
The yatra by road (walking) passes through
1. Pahalgam-16km-Chandanwari-3km-Pissu Top-9km-Sheshnag-12km-Panchtarni-6km-Holy Cave.
2. Baltal-2km-Domail-5km-Barari Marg-4km-Sangam-3km-Holy Cave.