An Adventurous Road Trip to Kalpa & Chitkul – Fixing the Tyre

The most saddening thing about 2020 for a person like me is that I haven’t been able to travel this year yet. To get over from this irritation, I usually write blogs about my previous travel experiences so that I can relive those moments and feel stable from inside. So here I am jotting down one of my best travel experiences that I had in 2019. It was the time of September end and my birthday was about to arrive. I always prefer to celebrate my birthday in the mountains and I was doing the same for the last 3 years. In 2016, it was Bali Pass Trek, 2017 was Hampta Pass, & 2018 was Bhutan. This time also, I wanted to celebrate and spend my birthday time on mountains doing some adventure. After thinking a lot and discussing with friends, I decided to go on a bike road trip to Kalpa & Chitkul in Kinnaur Valley, Himachal Pradesh.

Kinnaur Valley is one of the districts in Himachal Pradesh which shares its borders with China (Tibet). Being close to the border, the culture here is a blend of Himachali and Tibetan culture. Due to the long traveling distance, the places here remain lesser crowded as compared to the other places in the state. Some of the famous places of Kinnaur include Kalpa, Chitkul, and Nako. The best way to explore this region is by taking a road trip to Kalpa & Chitkul. Apart from all this, the state hosts several high altitude treks such as Pin Bhabha Pass, Rupin Pass, Lamkhaga Pass, etc.

Preparations before the trip:

We decided to rent out bikes from Shimla so we booked it in advance from one of the vendors based out there. We also pre-booked our stay at Chitkul and Kalpa. As per our plan, we were about to stay at Chitkul for 2 nights and Kalpa for one night. Apart from stay and bikes, we booked an overnight Volvo bus from Delhi to Shimla. It was going to be my 2nd bike trip and 1st for my friends and hence we were short of some biking gear. So we went to Decathlon to purchase the same.

DAY 0: Catching the bus to Shimla

Our bus was scheduled to depart at 10 PM from RK Ashram and we got late due to our lazy packing and traffic. We were sure that we would miss our bus so we decided to board it from Majnu Ka Tila as it would buy us a little more time to catch the bus. After requesting the conductor several times on call, we finally boarded the bus at 10:30 PM. The journey was smooth and we didn’t sleep due to excitement.

DAY 1: Begining the Ride to Chitkul from Shimla

We landed at Shimla by 7 in the morning. Had a piping hot tea near the Shimla bus stand and then we received our bikes, Royal Enfield Himalayan. There were 2 bikes and only one bike had a carrier for luggage. Luckily, we brought 2 rucksacks so there was no issue. Out of 4, Pranjal and Shivendra were heavyweight and I & Atishay were a bit skinny. Hence we decided that I and Atishay would ride on one bike and Pranjal & Shivendra would ride on the other so that we could ride properly. Without wasting time, we began our ride at 8 AM and took the road to Chitkul, which goes via Hindustan Tibet Highway.

The road was good and the weather looked stable at that time though it was a bit cloudy. We rode through Kufri and took our first stop at Fagu to have our breakfast. We had delicious aloo paranthas with curd (my favorite breakfast) and then got ready to resume the ride. As it was a long journey and we had to reach Chitkul on the same day, we decided to ride continuously and take the 2nd break at Rampur for Lunch. The road after Fagu was beautiful, having dense Deodar forest and apple orchards. After a couple of minutes, we had to stop again to put on the raincoats as it started drizzling.

Now everything was good and we were just 15 km away from Narkanda. Suddenly, a sound started coming from the rear tyre of one of the bikes on which I and Atishay was riding. We checked and found nothing, hence we started riding again. The sound started again and this time the rear tyre began shaking. Now it seemed a big problem with the bike and unfortunately, we had to stop. There were a few shops nearby, we pulled the bike there and asked for help. There was no mechanic available but people told us that there must be a problem related to bearing and advised us to go to Narkanda, as it was a big town and we could easily find a mechanic there.

Without thinking twice, we decided to go to Narkanda. The road was uphill and it was difficult as well as risky to ride together, so Atishay took a lift from some stranger who was also riding towards Narkanda & I rode the bike slowly all the way to Narkanda. It took around 40 minutes and we reached the mechanic shop at Narkanda. Guess what? The shop was closed. But there was a mobile number written on the wall, we called that number and the mechanic told us that it would take around half an hour to reach the shop. We decided to wait for the mechanic and roamed around the market. After half an hour, the mechanic came and checked the tyre. Fortunately, he had the bearing, so he replaced it and fixed the tyre. We tested the bike and now it was working well but the mechanic told us that the problem in the bike isn’t related to bearing. He advised us to go to Reckong Peo, as there was a big mechanic shop where all the genuine parts of Himalayan were available. We thanked him and resumed our ride. Now it was already 2 PM and we were skeptical that whether we would be able to reach Chitkul or not. We did not take any call at that time and decided to cover the maximum distance possible.

Now we were on our way to Rampur and the rain was continuing. We drove through Kumarsain, Kingal, and reached Rampur by 4 PM. The road was good having scenic views of Sutlej river valley. We did not stop at Rampur for lunch as we were short of time. Instead, we continued our ride and stopped near Jeori, at a restaurant named Tibet Kitchen. We ordered typical north Indian food such as Shahi Paneer, Naan, & Dal Makhni and surprisingly it was good. We enjoyed the meal after a hectic ride.

It was 6 PM by the time we finished our meal. The drizzling already turned into a bit heavy rain along with the thunderstorm. Without wasting any time, we resumed the ride and entered the Kinnaur District. While entering, we were stopped at a check post and we entered our details in the register. We had a short conversation with a policeman that helped us to take the decision of riding to Chitkul.

Policeman: Where are you going?
Us: Chitkul
Policeman: Haven’t you guys got late for Chitkul?
Us: Yeah, we think so
Policeman: It’s not safe to travel at this time as the roads are very narrow and you might encounter any wild animals as well. Also, the weather is also getting worse hence it’s better to stay at the nearby place.
Us: Thank you, sir. We will do the same.

After talking to the policeman, we were aware of the consequences but we also wanted to cover the distance as much as possible. We continued the ride and now the road was quite narrow. The landscape also seemed to have changed but we couldn’t see anything except the road as it was totally dark. The intensity of the rain was also getting higher and higher and it was getting difficult to ride in that weather. There was no one on the road except only one car which was ahead of us. Somehow we were struggling to ride in that rain and suddenly a beam of lightning fell on a nearby mountain. It was like a massive flash and it created a sound like a bomb blast. Everything started vibrating for seconds and we got scared like hell. We pushed the brakes and took a breath for a couple of seconds. Now we made up our mind that if we want to reach back home alive then we have to stay at the nearest place.

We started again and reached Bhabanagar in half an hour. The town looked good and there were a few guest houses available. We enquired and found one room at a good price. We then parked our bikes and checked-in into the room. It was quite early to sleep so we just had our dinner along with some booze and played cards. It was a long hectic day but full of thrill.

Read about the further ride and experience here : Road Trip to Kalpa & Chitkul Into the Rain & Thunderstorm

In case you want to explore this place by taking a customized package, then visit www.happygotrips.com or call at +91-7428710595 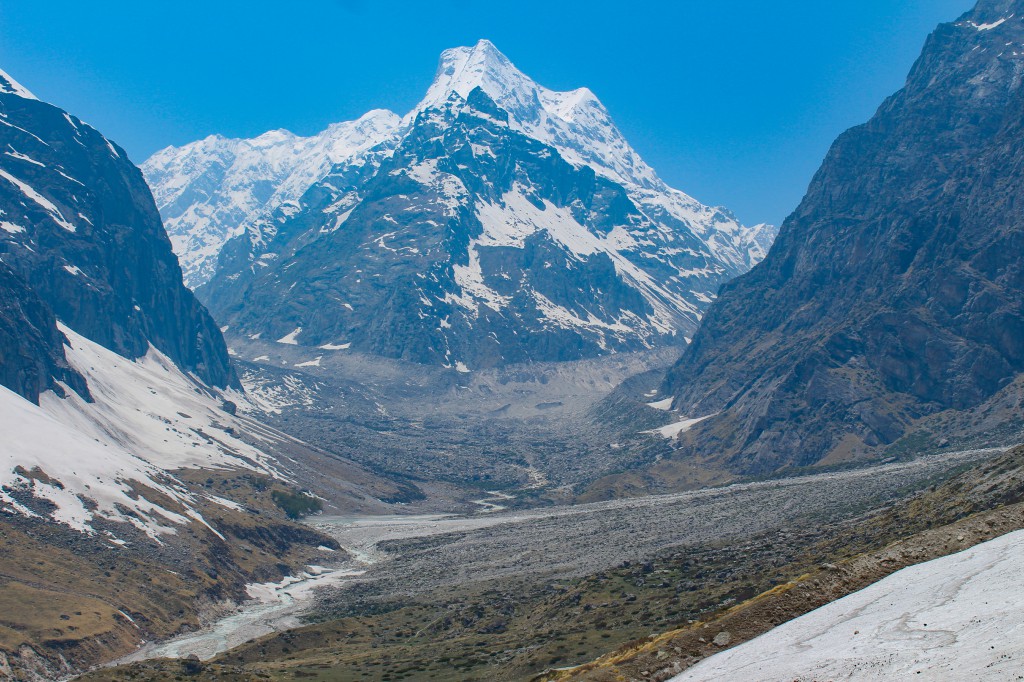